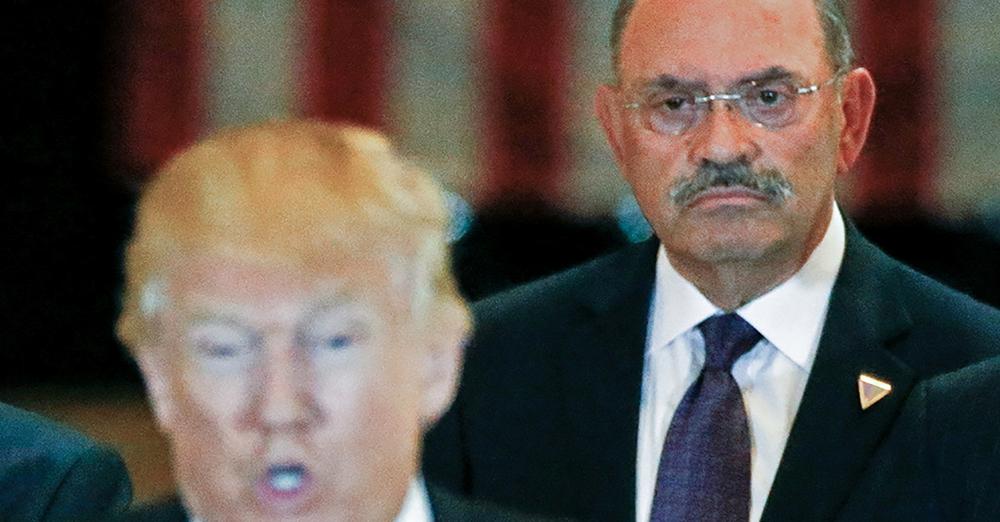 Allen Weisselberg, right, CFO of Trump Organisation charged with tax fraud, along with the company

In a sweeping indictment from Manhattan’s district attorney, the Trump Organization and CFO Weisselberg were charged with having schemed since 2005 to defraud tax authorities through the awarding of “off the books” benefits to company executives.

Weisselberg was charged with concealing $1.76 million of income including rent for a Manhattan apartment, lease payments for two Mercedes Benz vehicles and tuition for family members.

Donald Trump signed checks for the tuition himself.

“It was orchestrated by the most senior executives who were financially benefiting themselves and the company, by getting secret pay raises at the expense of state and federal taxpayers,” prosecutor Carey Dunne said at the arraignment.

Weisselberg, who has worked for Trump for 48 years, was also charged with grand larceny.

The indictment could undermine the Trump Organization’s relationships with banks and business partners.

It could also complicate Trump’s political future, as he resumes holding rallies and mulls a 2024 White House run, even though Trump himself was not charged.

“The political Witch Hunt by the Radical Left Democrats, with New York now taking over the assignment, continues,” Trump said in a statement. “It is dividing our Country like never before!”

Vance began his still-ongoing investigation nearly three years ago and has been working in recent months with the office of New York Attorney General Letitia James.

Both are Democrats, and attended Thursday’s arraignment in Manhattan criminal court.

Weisselberg, 73, wore handcuffs as he was led to the courtroom.

He was released without bail and driven away in a black SUV, with an onlooker shouting: “You’re going to prison.”

Alan Futerfas, a lawyer for the Trump Organization, told reporters after the arraignment that the company was “very optimistic” the indictment would not significantly hurt its business.

“If the name of this company was something else, I don’t think these charges would have been brought,” he said.

COMPANY SAYS ‘THIS IS POLITICS’

In a separate statement, the Trump Organization said prosecutors were using Weisselberg as “a pawn in a scorched earth attempt to harm the former president.”

It also called Vance’s case one that neither the Internal Revenue Service nor any other district attorney would ever bring.

“This is not justice; this is politics,” the company said.

The Trump Organization could face fines and other penalties if convicted.

The indictment could increase pressure on Weisselberg to cooperate with prosecutors, which he has resisted.

That cooperation could become crucial to any future case against his boss.

The Trump Organization operates hotels, golf courses, and resorts around the world.

Before entering the White House in January 2017, Trump put his company into a trust overseen by his adult sons Donald Jr and Eric, as well as Weisselberg. It is unclear what role Trump now has at the company.

Vance has been examining a wide array of potential wrongdoing at Trump’s company, including whether it manipulated the value of its real estate to reduce taxes and secure favorable loan terms.

He has also been examining hush money payments made before the 2016 presidential election to two women who said they had sexual encounters with Trump, which he has denied.

Michael Cohen, a former Trump lawyer who turned against his former boss and has cooperated with Vance’s probe, has said Weisselberg was involved in reimbursing him for payments to one of the women, adult film actress Stormy Daniels.

Jennifer Weisselberg, the former wife of Weisselberg’s son Barry, has been cooperating with Vance’s office, and provided tax and other financial records.

Vance has been district attorney for 11-1/2 years. He leaves office at the end of the year.