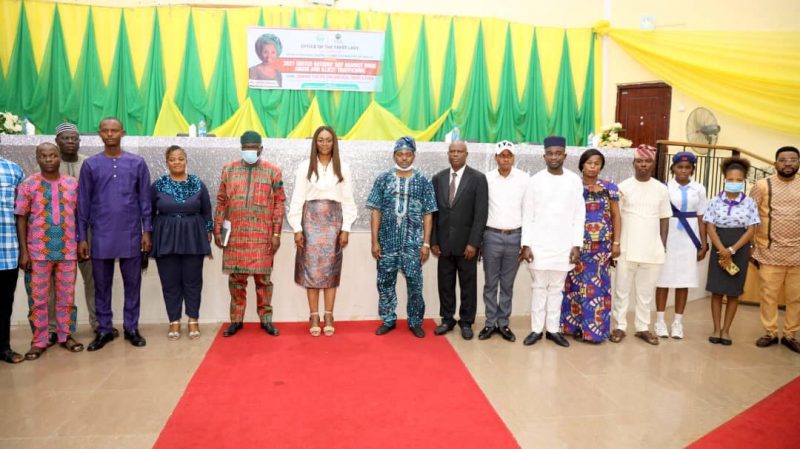 Achieving a drug abuse free society is a collective effort that should not be left with government alone but jointly handled by individuals and Institutions for a better and secured future for all.

First Lady and Wife of the Ogun State Governor, Mrs Bamidele Abiodun in the bids to make the state a drug free society, leads a campaign against drug abuse.

Mrs Abiodun with AJOSE Foundation and Ogun State Drug Control Committee (OSDCC), Ministry of Health brought this to the fore at the Town Hall Meeting organised to commemorate this year’s United Nations Day Against Drug Abuse and Illicit Trafficking with the theme “Share Facts on Drugs, Save Lives” held at the Oba’s Complex, Oke Mosan, Abeokuta.

Mrs Abiodun emphasized the need to focus on information and communication considering the social media age noting that many of the Young people mirror the actions of their Peers online and model their lives after celebrities that they see in music videos and movies.

She noted that “Many of these platforms are full of depictions of drug use which is linked to riches and a fashionable lifestyle. Policymakers must use these platforms to creatively communicate facts about drugs and the danger it poses to the lives of those who engage in their use. We need to leverage the power of the media to communicate a powerful message on the illicit drugs”.

She added that “One of the aims of this year’s theme of sharing facts is also to combat misinformation about drug use. Many think that certain drugs give them boldness and a false sense of confidence.

“The effect of this is that many of our youths, some as young as 13 to 15 years of age, buy into these lies and start taking drugs early and they become drug addicts even before age 20. Now is the time to focus on more efficient means of reaching our people where they are and in the language they understand”.

The First Lady said one of the focus areas of her pet project,
Ajose Foundation was to work with at-risk children and youths who deal with common problems associated with growing up adding that the Foundation would step up tactics in communicating the right message to them.

In her address, the Commissioner for Health, Dr Tomi Coker, said some 35 million people were estimated to suffer from drug use disorders according to the United Nations Office on Drugs and Crime (UNODC) survey 2018 noting that youths are the most vulnerable.

She added that the state government was committed to focusing on the youths by sensitizing and enlightening them through sharing of information and education to change the behaviour of drug abusers to live a drug-free life as well as counselling them on the dangers inherent in drug abuse.

The Permanent Secretary, Ministry of Health, Dr Adesanya Ayinde in his remark listed some of the commonly abused drugs and unconventional substances to be nicotine, marijuana, codeine, cocaine, heroin, tramadol, morphine, alcohol, glue, fumes from pit latrine and mixtures of different kinds.

He reaffirmed the determination and commitment of the Ogun State Drug Control Committee (OSDCC) to continue the campaign at addressing the menace to ensure that the people enjoy good health, peace and security regardless of the task.

The event had in attendance representatives of Youth Organizations, Nigeria Automobile Technicians Association, Market Women, Community Development Associations among others.