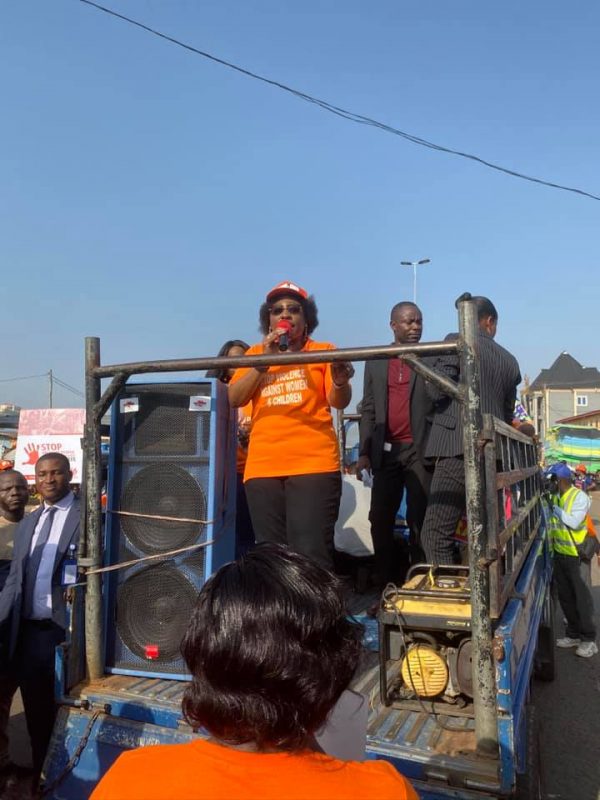 Erelu Bisi Fayemi, wife of Ekiti State Governor, has promised to train unemployed young women in the state on how to produce reusable sanitary pads.

The News Agency of Nigeria (NAN) reports that she made the pledge at inauguration of a programme tagged “Keep Girls in Schools Pad Bank” on Thursday, in Okemesi- Ekiti in Ekiti West Local Government Area of the state.

The governor’s wife said that it was to reduce poverty level and increase access to safe menstrual hygiene.

She urged those interested in production of reusable pads to make themselves available, stressing that arrangements had been concluded with an organisation that would train them.

Fayemi said that the essence of coming up with the programme was to keep matured girls in school during menstrual period.

”The beneficiaries should make judicious use of pads distributed to them.

The wife of the governor also said that the proposed mental health bill is being worked on to check the activities of some individuals engaging in sexual molestation of lunatics and mentally challenged women.

“The proposed bill will soon be taken to the House of Assembly for legislative action.

”We have different cases of lunatics being impregnated in the state, while their children had been taken to motherless home but we want this to stop,” she explained.

The Chairman, Ekiti West Local Government, Mr Kareem Agunbiade, enjoined parents to support government in provision of Pads for their girls most especially, when the reusable ones distributed were exhausted.

The Chief Press Secretary to the State Governor, Mr Yinka Oyebode, in his remarks, urged the students to take full advantage of the state’s free education programme.

”The policies and laws being championed by the office of governor’s wife to protect women and the girl child in the state, including the free reusable menstrual pads being distributed.

He also appealed to the students to pay adequate attention to their studies so as to realise their dreams of becoming great citizens and source of pride to their parents and the country.

The Owa Oye of Okemesi Ekiti, Oba Gbadebo Adedeji, commended the initiative in view of pains being experienced by school girls during menstrual period.