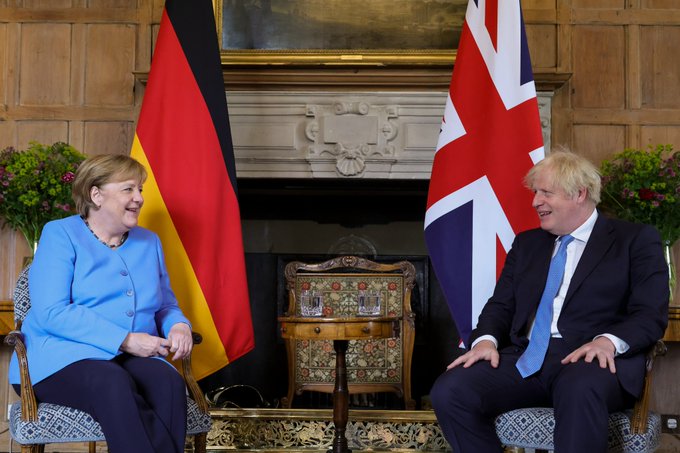 Boris Johnson and Angela Merkel: No agreement on Wembley crowd and COVID

Johnson, speaking alongside Merkel at a joint news conference, said he did not plan to order a reduction in crowds attending the remaining tournament matches at Wembley Stadium.

Crowd capacity at Wembley will be increased to more than 60,000 fans for the semi-finals and final of Euro 2020 under a pilot scheme announced last week.

“Of course we’ll follow the scientific guidance and the advice if we receive any such suggestion,” Johnson said in response to a question from a journalist.

“But at the moment… the position is very clear in the UK, which is that we have certain events which we can put on in a very careful and controlled manner with testing of everybody who goes there.”

Johnson also said Britain had built up a “considerable wall of immunity” against COVID-19 with its vaccination programme.

Merkel said she was worried about UEFA’s decision to allow bigger crowds during a spike in the coronavirus crisis caused by the Delta variant.

“I am worried and sceptical about whether this is good,” Merkel said at the same news conference.

The World Health Organisation said on Thursday that crowds at Euro 2020 stadiums and in pubs and bars in host cities were driving the current rise in coronavirus infections in Europe.

Scottish authorities said on Wednesday that nearly 2,000 people who live in Scotland have attended a Euro 2020 event while infectious with COVID-19.

Many Scots also went to London for Scotland’s group stage match against England on June 18.