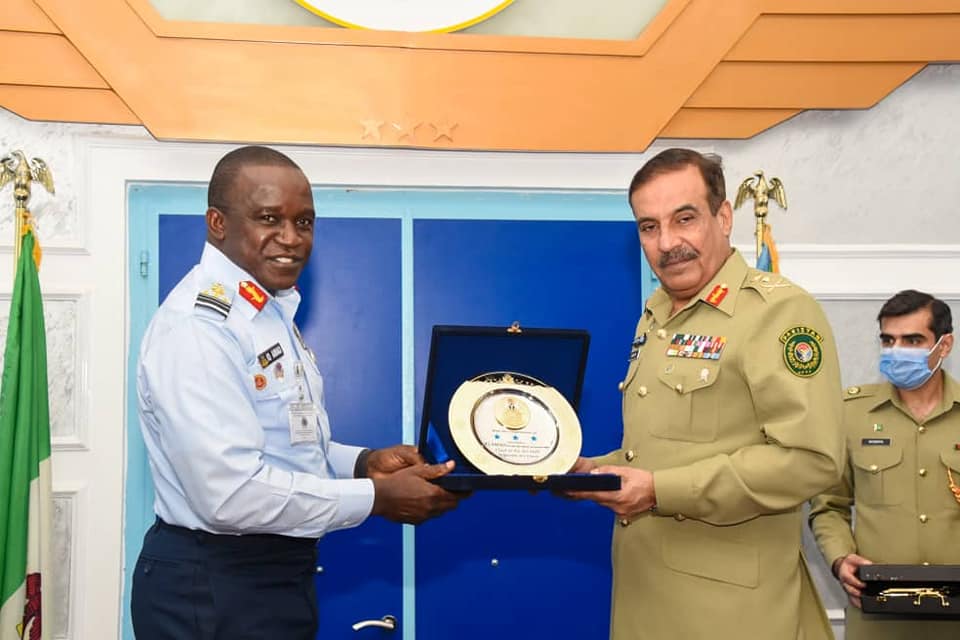 The Pakistani Chairman Joint Chiefs of Staff Committee (CJCOSC), General Nadeem Raza has expressed the willingness of the Pakistani Government to deepen its technical and defence cooperation with the Nigerian Air Force (NAF).

The Chairman made this known while on a courtesy visit to the Chief of Air Staff (CAS), Air Marshal Oladayo Amao in his office at Headquarters NAF, Abuja.

General Raza who was on a one-day official visit to Nigeria noted that Nigeria deserves a robust, versatile and tactical air force in view of her leadership role in Africa to be able to curtail various internal security challenges confronting her.

He assured that the technical cooperation between the Pakistan Air Force (PAF) and the NAF, especially in areas of platform acquisition, training of pilots, engineers and technicians as well as provision of counter-terrorism training would be boosted to further strengthen the relationship between the two countries.

Speaking further, the Pakistani CJCOS stated that several years of cooperation between the PAF and NAF had translated into a strong alliance that is helping both countries to respond proactively to their common security challenges of asymmetric warfare and other similar threats.

General Raza disclosed that his visit and interaction with the NAF leadership was in line with the common interest of Pakistan and Nigeria aimed at strengthening the relationship between both countries.

In his remarks, the CAS described the long-standing and mutually beneficial bilateral relationship between Pakistan and Nigeria as heart-warming and better exemplified by the symbiotic partnership between the NAF and PAF.

According to him, the relationship had yielded many tangible results over the years as manifested through successes recorded against various national security threats.

While highlighting mutual benefits of the long-standing relationship, Air Marshal Amao disclosed that the acquisition of the 10 Super Mushshak trainer aircraft, along with the training of NAF instructor pilots and ground crew has helped in boosting the operational capacities of the NAF.

The CAS also acknowledged Pakistan’s efforts in the areas of technical and operational support for the maintenance of NAF F-7Ni fleet and the local conduct of Periodic Depot Maintenance for the NAF C-130 Hercules aircraft.

He noted that the recent acquisition of 3 JF-17 Thunder multi-role fighter aircraft which were inducted into the NAF on 20 May 2021 was another huge benefit from the relationship.

He assured that the NAF, under his watch would continue to strengthen the collaboration to enhance the effective delivery of airpower towards tackling the security challenges in the country.