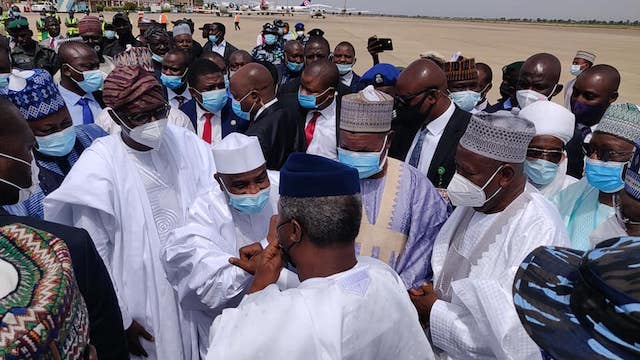 Kano residents troop out Saturday to welcome Vice-President Yemi Osinbajo and other dignitaries to the coronation of Emir of Kano, Alhaji Aminu Ado-Bayero.

The vice-president’s jet landed at the Malam Aminu Kano International Airport from where he and his entourage proceeded to Sani Abacha Stadium, venue of the coronation.

In his entourage were Prof. Ibrahim Gambari, Chief of Staff to President Muhammadu Buhari, Minister of Police Affairs, Mr Maigari Dingyadi, and Senior Special Assistant to the President on Media, Mr Garba Shehu.

There were also representatives of traditional rulers from Niger Republic and Cameroon.

Born in 1961, Emir Aminu Ado-Bayero is the 15th Emir of Kano from the Fulani Sullubawa clan.

He ascended the throne on March 9, 2020, following the deposition of his nephew Muhammad Sanusi II by Gov. Abdullahi Ganduje