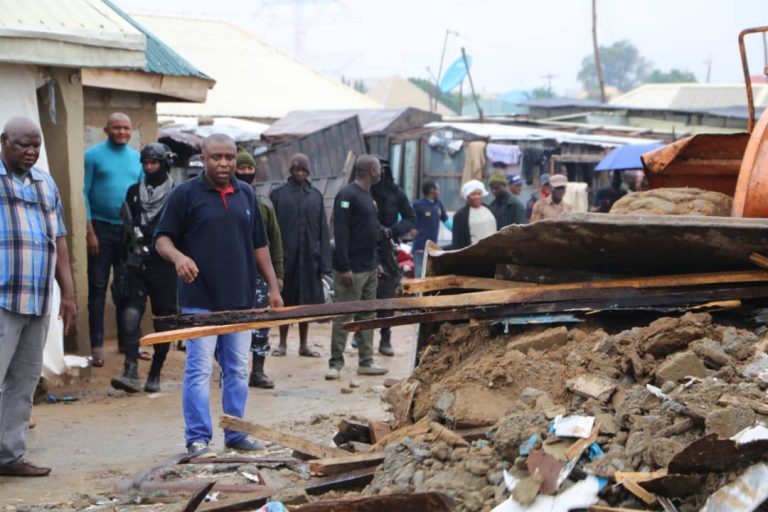 One of the demolished buildings

The Federal Capital Territory Administration (FCTA) has confirmed the demolition of over 400 illegal structures that constitutes security threat along the Nnamdi Azikiwe International Airport Road.

Attah, who led the exercise, said the operation was necessitated by the desire of the administration to enhance security of lives and properties in Abuja.

The News Agency of Nigeria (NAN) reports that the demolition, which affected Lugbe-Across, Lugbe-Berger, Car wash and Lugbe Zone 5, lasted for eight hours with heavy security personnel to avoid breakdown of law and order.

Attah explained that the FCT Administration had received disturbing reports that some illegal makeshift structures were being erected along the Airport Road despite several demolitions.

“Last week we were here and after clearing this place people have rebuilt some structures. And we cleared many structures again today.

“This time around we have taken more drastic measures. We also appeal to some of them who are building back after seven days of clearing to stop.

”They said they had approached the Federal Capital Development Authority (FCDA) for it,” he said.

On his part, the FCTA Director of Security Services, Mr Adamu Gwary, vowed that the administration would not fold its hands and watch criminals overrun the city.

Gwary said that the FCT Minister, Malam Muhammad Bello, was not happy with illegal structures posing security threat on the city.

He assured that with the minister’s will to removal of illegal structures would be sustained.

“The FCT Minister is not happy with the development along the Airport Road and as such he ordered the removal of all activities that will deface the vicinity and also create security threat to the nation’s capital.

“You can see that there are so many nuisances which come along with its own security implications. Recently the minister presented a paper on items vandalised.

“We have the support of the security agencies and all the departments in FCT are at work. You can see that we came out in the rain, once there is that go-ahead, there is no going back, we will sustain it.

“If we identify where there are nuisance, we will pencil it down for operation. It is not only the Airport road but the Airport road has you know is the eye of the city so, we cannot afford to joke with it,” he said.

Also, the Chief Security Officer to the FCT Minister, Mr Ahmed Rashid, disclosed that the administration had identified strategies that the scavengers, criminals and the illegal settlers are adopting.

“And where they are hibernating, we are dislodging them. As you can see the security challenges are increasing and we cannot wait until the criminals enter the main city before we deal with them.

“We are clearing all the illegal motor parks to reduce the number of one-chance. We also notice that they will strike in the city and go back to their safe haven.

”By the time we clear all their safe haven there will be no hiding place for them,” he said.