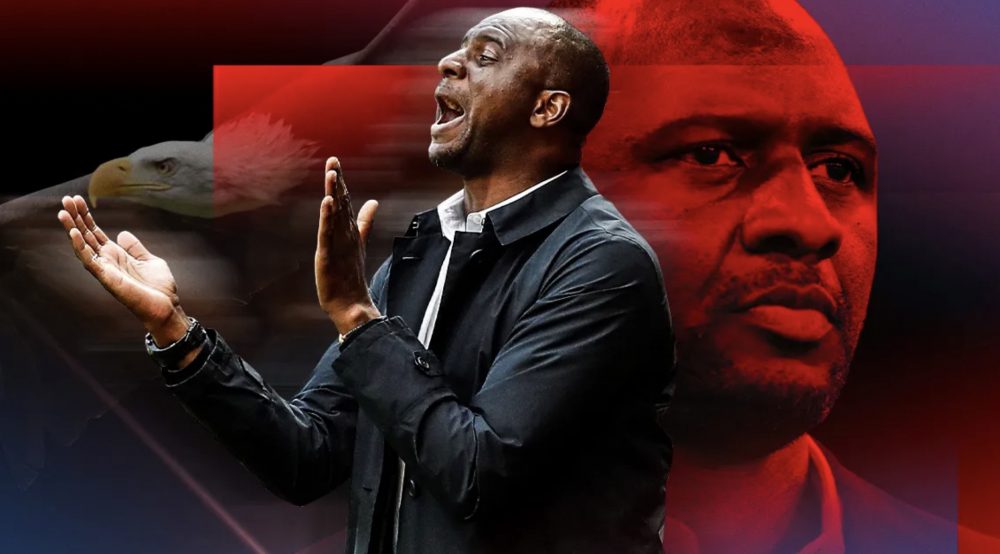 Crystal Palace have confirmed the appointment of Arsenal legend, Patrick Vieira as their new head coach.

P.M. News reported that Vieira was heading to the South London club.

The position has been vacant since Roy Hodgson left by mutual consent after four years at the helm at Selhurst Park at the end of last season.

The 45 year-old Vieira, who captained Arsenal 45, has signed a three-year contract, till 2024.

Considered one of the best players of his generation, Vieira played an integral part in Arsenal’s domestic success between 1997 and 2005 under Arsene Wenger, winning three Premier League titles and four F.A. Cups.

He represented the Arsenal 396 times, and was named in the Premier League PFA Team of the Year for six consecutive years.

After leaving Arsenal, the midfielder went on to spend a season at Juventus, before securing more silverware at Inter Milan (three Serie A titles and two Supercoppa Italiana cup triumphs) and Manchester City (one F.A. Cup win) where he brought to a close a remarkable playing career in 2011.

On the international stage, Vieira made more than 100 appearances for France over a 12-year period, which included several spells as captain, winning the FIFA World Cup in 1998 and UEFA European Championship in 2000.

Having hung up his boots, Vieira began his transition into coaching at Manchester City’s Academy, embarking on a four-year apprenticeship in management that included a spell managing the club’s Elite Development Squad.

He departed City for the States and the 2016 Major League Soccer season, taking up the managerial position at New York City F.C, who had finished 17th the season prior. He led them to second place in the Eastern Conference in his first season, with the side finishing fourth place overall. The next season, another second place position in the Eastern Conference was secured, and Vieira’s side ended overall league runners-up.

Vieira subsequently returned to France to manage Ligue 1 club Nice in 2018, securing a seventh place finish in his first season – one place higher than their previous campaign. In 2019/20, Vieira’s side placed fifth in a curtailed season, securing a Europa League spot in the process.

Chairman Steve Parish said: “I’m delighted and excited that Patrick has agreed to join Crystal Palace as our manager following successfully learning his trade at the City Group, and experiencing positive managerial spells at New York City and then Nice, who he led to the Europa League.

“We have a lot to do to prepare in the coming weeks and I look forward to working closely with Patrick and Dougie in bringing in some new faces to help us all to a successful season.”

Patrick Vieira said: “I am really excited to have this opportunity to return to the Premier League, and manage this great football club, as we begin a new chapter together.

“It is a project that is really appealing to me, having spoken a lot with the Chairman and Sporting Director about their ambition and plans for the whole club, including the Academy. The club has fantastic foundations in place after many years in the Premier League, and I hope we can make further improvements and continue to drive the club forward.

“I am also very excited to experience the atmosphere the club’s supporters make at Selhurst Park and away from home too, and I know just how important that can be for the team.”