Climate change a big lie, climate is heating up 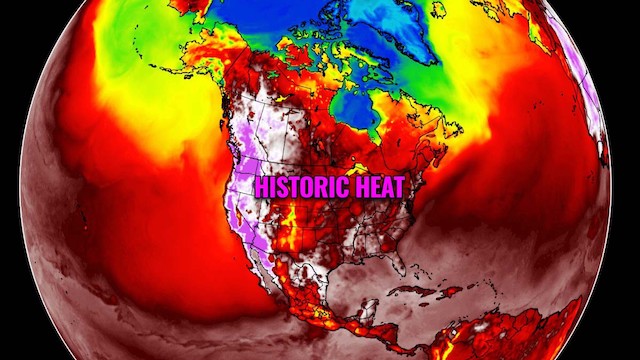 Climate is not just changing, the world is heating up

By now, you might heard the shocking, gruesome fact, that 300 people are dead…in Canada…from the heat. There’s a “heat dome” stretching over the Pacific Northwest, that’s made it nearly as hot as the hottest places on earth. Jacobabad, Pakistan claims that title — with average temperatures of 50ºC. Portland, Oregon hit 46ºC.

This is the brutal, startling reality of climate change.
Of..wait..what?

“Climate change”? The climate isn’t changing. It’s heating. Rapidly. Faster than at any point in hundreds of millions of years. It’s heating so fast that this is the stuff entire geotemporal boundaries are made of — “ages” in geological history. So fast that it’s shattering scientists’ worst predictions — and making reality look like a sci-fi movie, where scores of people die off in Canada because of sweltering heat.

We should stop calling it “climate change.” Now, before you object, bear with me, and let’s investigate the history of the term.

We used to call it “global warming.” Not so long ago. The big we, as in, all of us, because that is what the norm was. That’s the term which dominated public discourse, and you’d read it in papers and books and articles. Not the seemingly anodyne “climate change.”

That was a far, far more accurate term. And that was the problem.

Here’s little factoid for you. Do you know who invented the term “climate change”? Frank Luntz. The Republican “strategist.” Why? Because “global warming” was dangerous. Because it was true. Too frightening. Too true. Too real. Too self-explanatory, powerful, and strong. It had to be Orwellianized. It had to memory-holed. Doublespeak had to be crafted — to create the impression that there was some “debate” on this topic.

Doubt had to be manufactured. That’s why Luntz invented the term “climate change.”

Luntz rebranded global warming as “climate change” because it sounds far, far less dangerous, problematic, severe, worrisome. The usual network of right-wing think tanks and media outlets immediately — as if by design — began to use it. And the rest is history. By now, all of us use a term that a Republican strategist came up with to make global warming sound less dangerous and wonder why we can’t fix the planet.

There you are, probably, like a dummy, still using it. You’re using terms designed by a Republican strategist who wanted to deny the truth of global warming to refer to it. What does that make you? A sucker, a mark, a rube. You’ve fallen for a branding campaign. One designed to pull the wool over eyes about, oh, only the most urgent issue on earth, on which your life and prosperity very much depend, too. Just ask the people in Canada who died of the heat. Oh wait, you can’t, because they’re dead.

Sorry to be harsh — but I feel we have to speak honestly about such matters. Because, of course, there is no doubt about what’s happening to the planet. It’s not cooling, it’s warming, it’s not natural, it’s profoundly unnatural, as in, human-made, and even at that, made by a certain lifestyle of rampant overconsumption, sprawl, greed, and materialism.

What does that make Luntz, by the way? Well, it’s not too hard to see that Luntz’s idea of rebranding global warming as climate change worked.

For decades, nobody much cared. Luntz’s rebranding took place in the early 2000s — when the window to stop the planet hitting severe warming was closing. And the window did close. Now, two degrees of warming is more or less locked in. We’re only at about one so far — and we’ve got killer heat domes in Canada. Want to venture a guess about what happens as the temperature goes on rising?

Lunt’z campaign worked brilliantly. Elites around the planet began using this new term — “climate change” — to sound smart. To please America, the most powerful nation on earth. To align their interests with it. And as elites changed their language, their attitudes and sentiments changed, too. No longer was anyone interested in really stopping runaway global warming. Why — did such a thing even exist?

It was Orwell’s great lesson writ large. If you can disappear a thing in language, you can make people stop thinking it, and it simply…vanishes. The point of Orwellian doublespeak is to veil the truth with doubt, to filigree it with the shadows of complacency, to make the lie seem real. And the truth is that thanks to Luntz, the GOP, American media, and elites around the world following their lead, the dire threat of global warming soon enough became the anodyne sounding “climate change.” And who really worries about that? It makes you think you might be sitting on a tropical beach sipping a Mai Tai — not boiled alive by a killer heat dome.

All the urgency and danger and severity went out of the issue, and the world simply dilly-dallied as if there was plenty of time to waste about a problem that probably wasn’t even going to be much of a problem.

Bang. And here we are, just a few short decades later. The planet has heated dramatically. People are dying from killer…not heat waves…but “heat domes.” We need a whole new vocabulary to describe how rapidly and badly the temperature’s rising. “Summer” doesn’t quite mean what it used to. It’s now a time of mortal danger for people, whether from “heat domes” or “megafires” or “megafloods” or “megafires” and so on.
And yet we’re still using the vocabulary of global-warming deniers to describe all this: “climate change.”

We’ve been made fools of, in such a deep and lasting way. It’s taken away our power — using the Orwellian language which was chosen for us — to fight the biggest and most urgent problem human civilisation has ever faced.

So if using the term “climate change” make us apathetic, spineless, useful idiots, to elites who’d happily watch the world literally burn — what does that make Frank Luntz? Well, Luntz will — or perhaps should — probably go down as one of history’s great monsters. 300 people in Canada are already dead. Climate change is going to claim tens, probably hundreds millions of lives. As nations burn, cities sink, societies go up like tinderboxes, and the desperate and impoverished try to flee it all.

Nobody can really say how much of that death and despair can be ascribed to Luntz alone. But would you like have to played a hand in hundreds of millions of deaths?

Maybe that’s why Luntz himself is apologetic about his malign, Orwellian creation. Of course, apologies aren’t nearly enough. It’s like watching an abuser hit you and say “sorry.” Redress means a whole lot more, and it starts the true process of reparations.
Luntz? I don’t think history will ever forgive him, and that’s OK — he doesn’t seem like the kind of guy who cares.

But you should. You should care intensely about all this. Because, like I said, you’ve been made a fool of. You’re using the language global warming deniers invented to try, futilely, to describe what’s happening to a dying planet. Of course, it doesn’t work very well, because they invented the very term “climate change” to stop any reality from entering the discussion, minds, societies, public spheres. Their goal was to kill the truth, and they succeeded.

“Climate change” might well prove the Biggest Lie ever told.
So you should stop telling it, too. It’s not “climate change.” It never was. It’s “global warming,” (or “global heating,” if you like, but that sounds a little silly) and we should all reclaim that term. Yes, it sounds dire. That’s because it contains power, resonance, urgency, forces a confrontation with reality. It has deep, serious, profound meaning. Yes, it’s frightening.

It should be. Because it’s true.