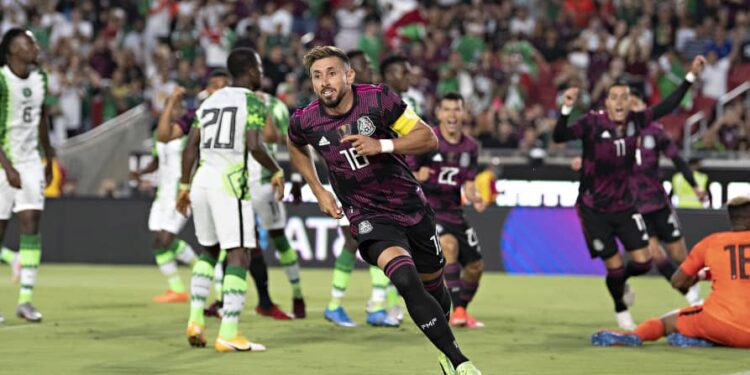 Nigeria’s Super Eagles have had a game to forget as they suffered an embarrassing 4-0 loss to Mexico, in an international friendly.

The Eagles squad, comprising mainly home-based players had only one foreign-based player, Ibrahim Sunusi, who plays for CF Montreal.

Mexico took charge of the game two minutes into the first half after Hector Herrera, headed in from a corner kick.

The Eagles who could not handle the quality of the Mexicans suffered another blow two minutes after conceding the first.

Half time ended 2-0 as the Eagles failed to register a single shot on target in the opening half.

El Tri resumed their riot on the Eagles six minutes into the second half as Hector Herrera made it three for the home side, capitalising on a goalkeeping error from Stanley Nwabali.

Substitute Jonathan dos Santos compounded Nigeria’s woes as he fired in a fourth 13 minutes from time to cap off a dominant performance.

The game was almost like an overkill as the Mexicans had eight corner-kicks while Nigerians had only two.

The Super Eagles could only muster four shots at goal, with none on target, as against 20 by the Mexicans who had 11 of them on target.

The game was used by the Mexicans to round off their preparations for the 2021 CONCACAF Gold Cup Competition which begins July 10.

Following their huge loss today, the Eagles have a chance to redeem their image in their next world cup qualifying match against Liberia.

The game is scheduled for Wednesday, 1 September.