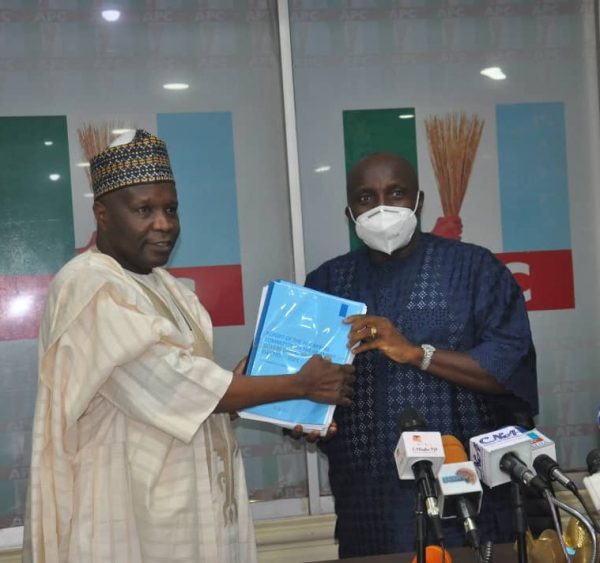 The Anambra Governorship Primary Election Appeal Committee of the All Progressives Congress (APC) has submitted its report to the leadership of the party.

Gov. Inuwa Yahaya of Gombe and Chairman of the committee, presented the report at a ceremony on Monday in Abuja.

He said the petitions were diligently addressed in line with the party’s guidelines and constitution.

He added that in spite of the limited time, the committee was able to get to all the aspirants and principal stakeholders in the state.

“We thrashed the issues and advised the party accordingly.

“The summary of all our undertakings is what we have here as our report, plus some of the documents that we are able to get from members, in terms of either petitions or recommendations or advice,” he said.

Yahaya said that the report was in the interest of the party and its members, saying it would guide the party towards winning the Nov.6 governorship election.

“As I promised, we did justice to the assignment. We heard their complaints, we went through the petitions and we have written our report based on the materials we got that could help us to prepare our recommendations.

“Virtually, all the aggrieved aspirants attended the meeting, we summoned all of them and even senior stakeholders from the South-East, particularly from Anambra,” he said.

Emphasising that the report was a properly done working document, he thanked the party’s leadership for the opportunity to serve in the committee.

Receiving the report, Sen. James Akpanudoedehe, National Secretary, APC Caretaker and Extra-ordinary Convention Planning Committee (CECPC) assured that the report would be critically and objectively looked into by the party’s leadership.

He appreciated the committee for delivering on its mandate within a record time, considering the urgency of the assignment.

“I want to assure you that the committee will look critically with objectivity at this report.

“Even though, I don’t know what is contained in it, at the end of the day, the party supremacy and the party direction will be guided by what you have done,” he said.