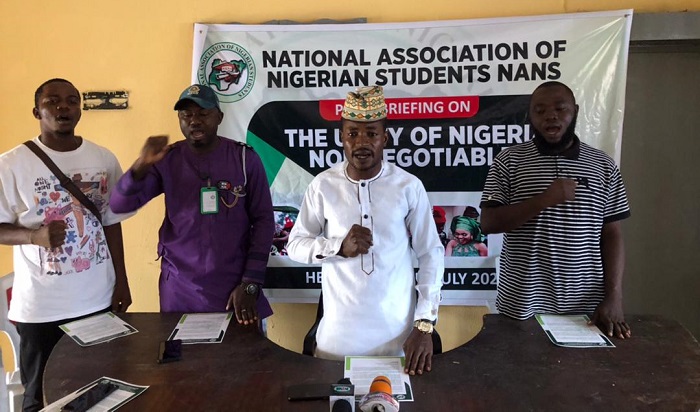 The National Association of Nigerian Students (NANS) has disassociated itself from a purported meeting with popular Islamic cleric, Sheikh Ahmad Gumi.

Sheikh Gumi has in recent times been known to be friends with bandits who are notorious for kidnappings, rapping and killing students.

NANS President, Comrade Okereafor Bestman Opeyemi during a press conference held at Ogun Press Centre, Iweroyin Abeokuta, hinted that NANS under his watch has absolute confidence in the gallant and intelligent Security agencies in the country.

Bestman said NANS does not believe in having to seat with the person who appears to be doing the country a favour by meeting with bandits for negotiation.

He, however, implored security operatives in the country to ensure the prompt release of abducted Nigerian students still in captivity in different parts of the country.

Bestman also threatened to shut down Kaduna State if the government, Mallam Nasir El-Rufai does not reverse the unjust increase of school fees in the state owned higher institutions.

He said the student body will not take it easy with the government if the governor does not reverse all increments within 14 days.

Bestman also noted that information at their disposal reveals that a student of the College of Education, Gidan Waya, Kafanchan was allegedly killed by security operatives on the 28th of June, 2021 during a peaceful protest against the planned hike in their tuition feels.

He, however, urged all state governors to equip security agents in their respective state with latest digital gadgets such as drones, mobility ,among others, basically to help flush out bandits and criminal elements in their states.

“NANS is dissociating itself from a purported meeting with Sheikh Gumi a known friend of notorious bandits who kidnap, rape and kill our students. And an injustice to one is an injustice to all!

“The leadership of NANS under my watch has absolute confidence and insurance in our gallant and intelligent security agents and therefore, implore them to ensure the prompt release of abducted Nigerian students still in captivity in different parts of the country.

“We strongly believe in the non-NANSnegotiable and indivisible unity of Nigeria,” he said.