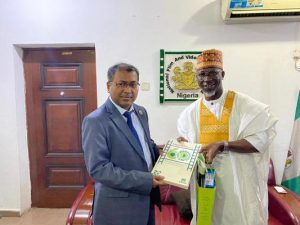 Bangladesh High Commissioner to Nigeria, Mr Masudur Rahman, has called for collaboration in film making between his country’s movie industry and the Nigeria’s Nollywood.

Rahman made the call when he paid a courtesy visit to the Headquarters of the National Film and Video Censors Board (NFVCB) on Tuesday in Abuja.

The Envoy, who was received by the Executive Director/CEO of the Board, Alhaji Adedayo Thomas, and his management team, said the visit was to build relationship with the NFVCB.

According to him, such collaboration will further strengthen bilateral relationship between the two countries and also serve as a platform to further expose and grow both countries film industries.

He said it would also promote exchange and transfer of cultural heritage.

He said that both Nigeria and Bangladesh, as common wealth countries, had a lot of similarities in their journey to independence, history and culture.

The Envoy added that collaboration in motion pictures would offer opportunities in telling their stories together.

“Bangladesh and Nigeria have a lot of commonalities; as we are both secular countries colonized by the British, and then with similar historic and cultural heritage.

“Many Nigerians are going to Bangladesh for education, sport, and now I want us to strengthen our relationship through film and culture,” he said.

The High Commissioner noted that the Nigerian story and culture as showcased through Nollywood films were widely accepted in his country.

He said that the Bangladesh Film Development Corporation would be willing to champion collaborations in acting, production, distribution and capacity building.

Thomas, in his remarks, expressed delight in the High Commissioner’s visit and pledged the board’s willingness to work with him.

He said that NFVCB regulated films and video industry in Nigeria.

He noted that the Nigerian film industry had grown exponentially over the last decade as the industry was no longer for entertainment alone, but had offered great investment opportunities.

The executive director said that the board under his watch was willing to champion collaborations between stakeholders in the Nigeria film industry and their foreign counterparts.

He, however, decried the high rate of piracy as a major bane facing the evolving Nigerian moving industry, especially with the emergence of digital distribution platforms.

“All the foreign films that are being sold in our markets today did not pass through censorship and classification.

“So, they are illegal and the board has been carrying out raids to sanitise our industry of such products.

“Collaboration such as this will present the right opportunity for both countries to legally distribute their films.

“I strongly believe that government would provide policies and enabling environment for players in the industry and that is what President Buhari has done through the “Ease of Doing Business initiative”.

“As a board, we will facilitate a meeting that will kick start the process, where our filmmakers will link your professionals for a co-productions and other collaborations,” he said.