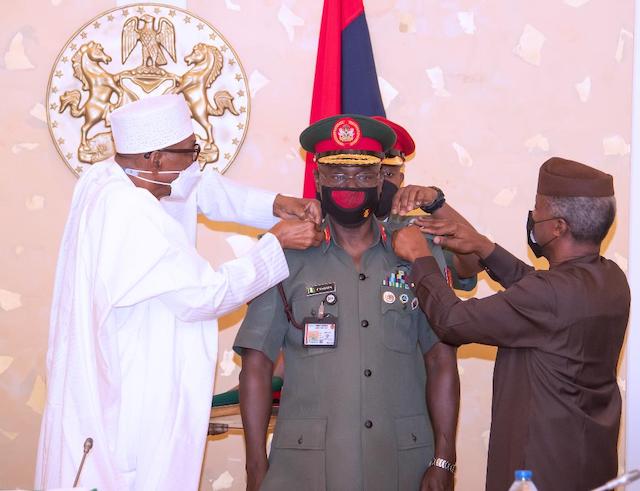 The chief of army staff, Major General Faruk Yahaya is now a Lieutenant General, in line with Nigerian army tradition.

President Buhari, assisted by Vice-President Yemi Osinbajo and Yahaya’s wife, Hajiya Salamatu decorated the army chief with all the paraphernalia of his new status.

Yahaya took over from former Chief of Army Staff, Lt. Gen. Ibrahim Attahiru, who died in a military plane crash along with ten military officers in Kaduna on May 21.

Yahaya, who hails from Skokto State, had served as the Theatre Commander of Operation Hadin Kai, a counter-insurgency operation in the north-east before his new appointment

The event was witnessed by members of the Federal Executive Council, security chiefs including Chief of Defence Staff, Gen. Lucky Irabor.

Others were the Director General, Department of State Services (DSS), Yusuf Bichi, and the Inspector General of Police (IGP), Usman Baba.