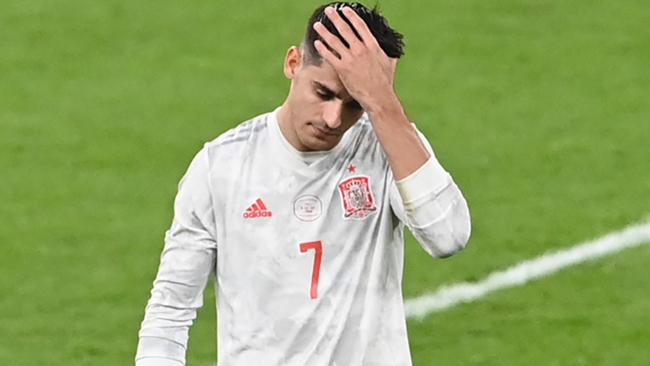 Alvaro Morata, Atletico Madrid striker, was for a while the hero for Spain after saving the country from being ousted by Italy at full time.

Another moment, the winger turned to zero after missing a penalty in the shoot-out, making Italy book their place in the Euro 2020 final.

At the kick-off, he was left out of Spain’s starting line-up for the first time, having endured jeers from fans.

But he became a super substitute when he came in to cancel Federico Chiesa’s superb curled opener 10 minutes from time.

Neither side could find a way through in the additional period in what was a repeat of the 2012 final, which Spain won 4-0 for their third European title.

History did not repeat itself as Italy prevailed in Tuesday’s enthralling clash at Wembley.

Morata’s penalty was saved by Gianluigi Donnarumma, paving the way for Jorginho to convert the winning spot-kick in a 4-2 shoot-out triumph.

Italy have now extended their unbeaten run to 33 games to set up a clash with either England or Denmark in Sunday’s final at the same ground.

The final will be Italy’s 10th. Only Germany with 14 finals have a better record.

However, Italy had not won the European Championship trophy since 1968.