JUST IN: Fuel tanker crushes many students to death in Delta 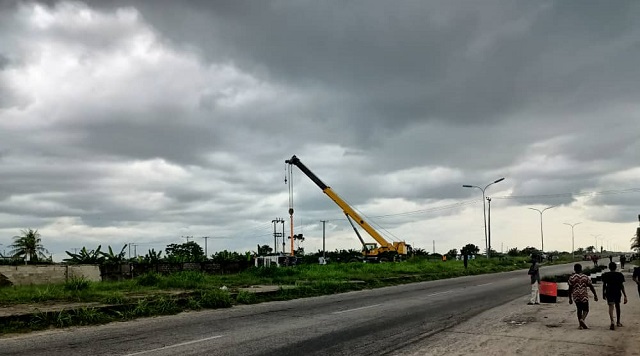 The fuel tanker being evacuated

There was heightened anxiety on Thursday, in Effurun, near Warri, Uvwie Local Government Area of Delta State, when a fuel tanker ran into dozens of students of Army Day Secondary School, killing many in the process.

Army Day Secondary School is located inside the Gen. David Ejoor Barracks of the Nigerian Army, along the ever busy Effurun/NPA highway that leads to the Warri Refinery, where scores of tankers ply on a daily basis, to load petroleum products.

The accident occurred at about 3.00pm, as the students just closed from school, when the petroleum product-laden tanker, allegedly ran into them.

While the exact number of pupils involved in the accident was yet to be ascertained, it was gathered that 12 of the victims were rushed to the Central Hospital, Warri.

Nine of them were said to have been confirmed dead on arrival, while three others were referred to the Delta State University Teaching Hospital, Oghara, after being stabilised.

Parents of students of the school were seen rushing to the scene of the accident.

A heavy duty crane was also drafted to the scene to pull off the tanker to enable rescue workers recover other pupils still trapped under the petroleum tanker.

A joint team of the Nigerian Army, FRSC and other security agencies were seen making frantic efforts to recover the remaining pupils trapped under the tanker.

Vehicular movement on the busy highway was blocked, while firefighters were stationed at the scene to prevent fire outbreak.

As at the time of filing this report, no official statement has been issued by the Delta State Police Command, neither was the Command’s Spokesman, DSP Bright Edafe reached on his mobile phone.