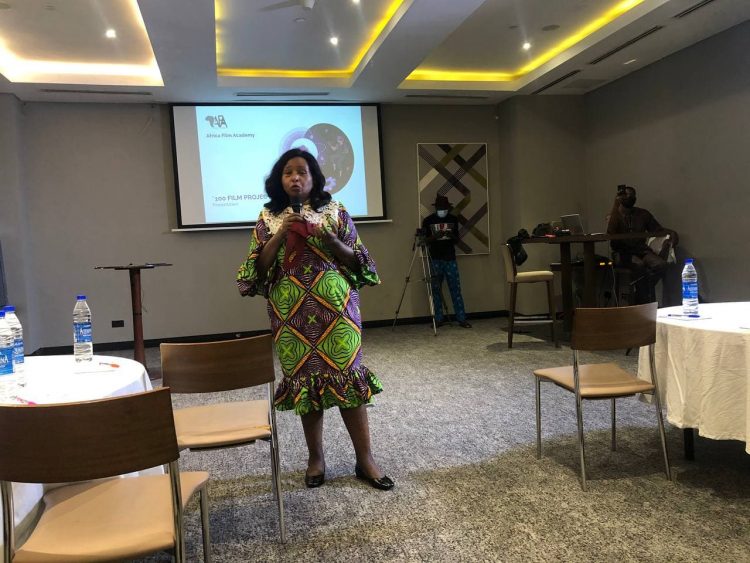 Peace Anyiam-Osigwe, chief executive officer of AFA during the event

Africa Film Academy (AFA), the organiser of the Africa Movie Academy Awards (AMAAs), has called for increased collaboration between movie producers and marketing brands to promote the Nollywood industry.

Peace Anyiam-Osigwe, chief executive officer of AFA, made the call during a brunch dialogue in Ikeja, Lagos state capital.

The event organised by AFA was attended by brand managers and other stakeholders in the movie industry.

Anyiam-Osigwe, who also serves as president of the association of movie producers, said brands need to leverage the film industry to promote their products both locally and internationally.

“Brands need to integrate with the movie industry and understand that product placement are important in building brands. So by integrating themselves to our films, they have more mileage,” she said.

The AFA CEO said the academy is working on a “100 film project” which seeks to empower youth through filmmaking.

She said the project will help in providing jobs and integrating brands into the film industry.

“The 100 film project is a skills-to-work project. The Africa film academy has been training a lot of people over the years but this time around, we want to make sure they actually have jobs, so we are making films with them with all the guilds in the Nigerian film industry,” she said.

“AFA owns the AMAAs, so we are trying to promote youth empowerment and to make sure that the youths are engaged. So it is a skills-to-work necessity because there is a gap and we are trying to work on it.”

During an interview at the sidelines of the event Joshua Chibueze, co-founder and chief marketing officer at Piggyvest, said the event is a step in the right direction.

Chibueze said the dialogue will help to bridge existing gaps and boost the relationship between brand managers and movie producers.

“The 100 film project is a very interesting concept and it is something that brings all the stakeholders in the industry together to finally move things forward,” he said.

“I think this is the right approach. Dialogue is always a very interesting way to go. There are so many loopholes from the angle of brand managers to film producers.

“Everyone needs to come together and agree on something because the film producers have a lot of things they want to achieve and this is a very good initiative for them to get started with and the brand managers are also asking what are the numbers.

“This kind of platform basically highlights these things and make it very possible for collaboration to happen.”