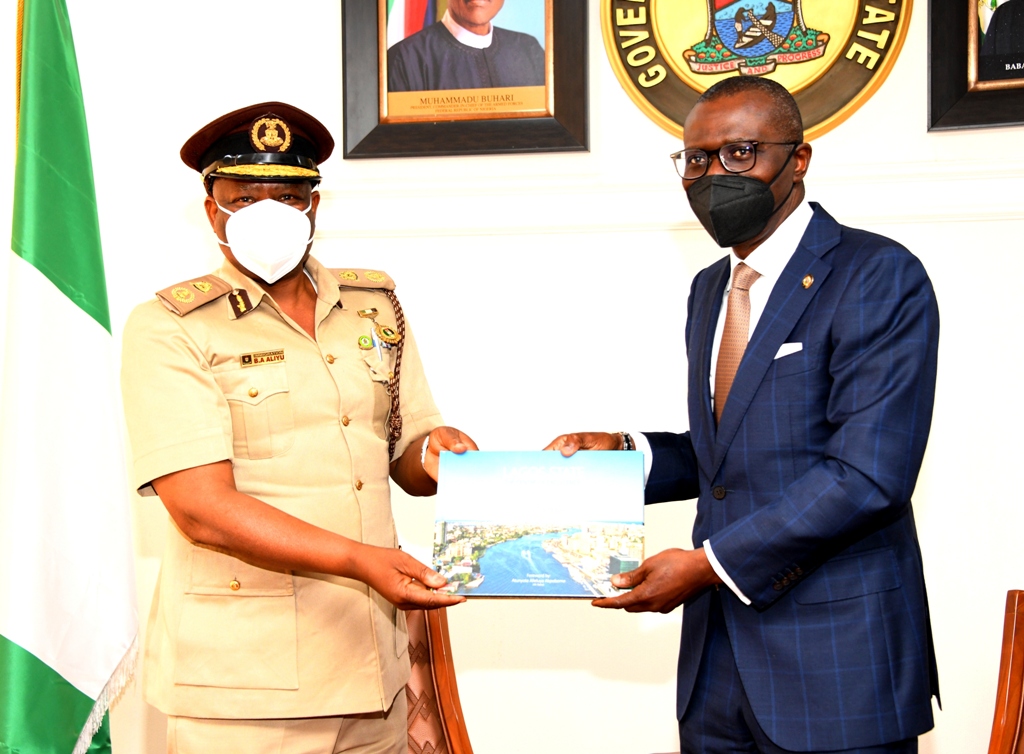 Lagos State Governor, Babajide Sanwo-Olu, has charged the Nigeria Immigration Service (NIS) to rise to the occasion of a disturbing event being observed in the management of Coronavirus (COVID-19) pandemic and save the nation from imminent third wave of the virus’ spread.

The Governor spoke against the background of fresh transmission recorded in the past few days in Lagos and confirmation of highly contagious Delta variant of the virus in the country.

Sanwo-Olu said the Immigration had a statutory responsibility to prevent further spread of the virus by keeping their eyes on immigrants coming into the country through land, sea and air borders.

This, the Governor said, would help the Incident Command team to curtail the rate of transmission and manage cases already confirmed.

The Lagos helmsman spoke on Monday when he received the Comptroller of the Lagos State Command of the Nigeria Immigration Service, Bauchi Aliyu, in a courtesy visit at the State House, Alausa.

The Governor’s meeting with the Immigration boss came after Sanwo-Olu raised the alarm over the disappearance of some air passengers, who came into the country via Murtala Mohammed International Airport (MMIA) in Lagos but could not be reached for COVID-19 status monitoring by EKOTELEMED because they supplied wrong contact details.

As the gatekeeper, Sanwo-Olu charged NIS to work with frontline responders stationed at ports of entry across border posts to ensure in-bound travellers adhere to laid down COVID-19 protocols.

He said: “We are monitoring events that may lead to the third wave of COVID-19 in the country and this is why we need to work together with the Nigeria Immigration Service. As the gatekeeper, you have statutory responsibility to work with our frontline health workers to ensure that people that are coming into the country obey our rules and conform with the protocols.

“Nobody is above the law. We have designated some countries as red zones, and this is not discriminatory. We want to be able to monitor anybody coming from countries with high burden of the virus. We want the Immigration Service to play its role, so that we can nip the influx of new variants in the bud. We know that the virus is usually imported; we must be vigilant and ensure all protocols and guidelines are strictly observed, especially at airports.”

The Governor urged the Service to ensure passengers coming into the country were duly monitored and accounted for.

Sanwo-Olu accepted the Comptroller’s proposal for the mop-up of irregular migrants in Lagos, noting that such operations would help improve security in the State and aid the Government to identify non-Nigerians working illegally in Lagos.

The Governor promised continued support and collaboration with the Service in order to make the State safe for investment and living.

Bauchi praised Sanwo-Olu for the State Government’s support for the Service, pledging that the Immigration was ready to partner with the current administration in improving the State’s mega city status.

The Comptroller also submitted a letter requesting the Governor’s support on logistics and operations.