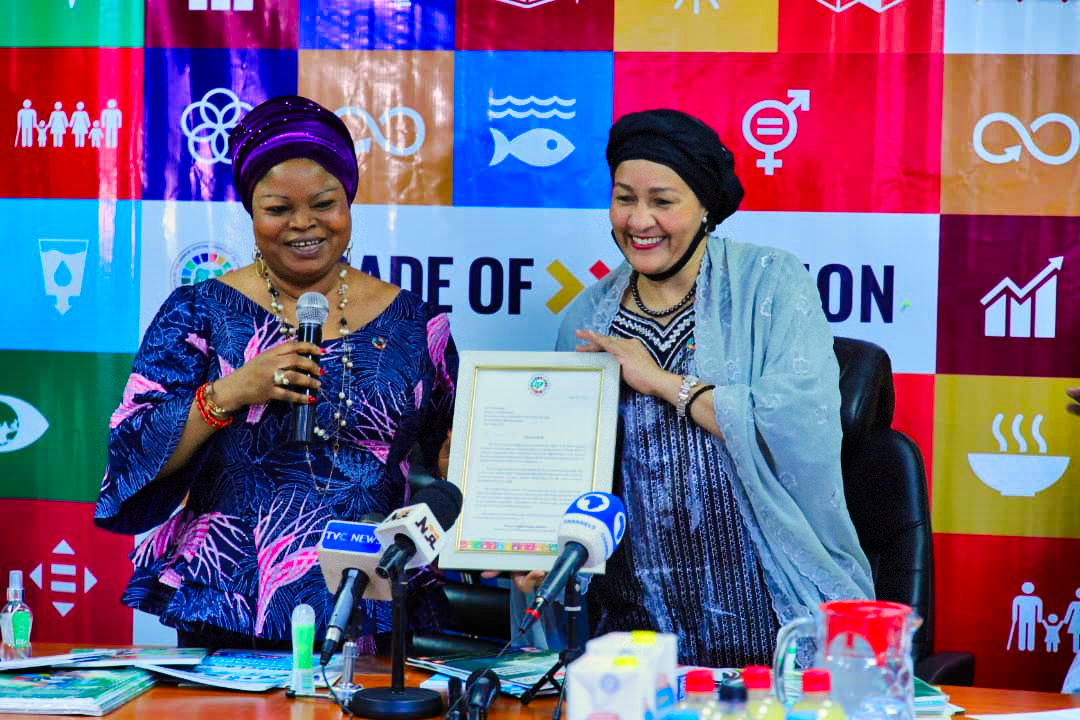 The Senior Special Assistant to the President on SDGs,SSAP=SDGs, Princess Adejoke Orelope-Adefulire presenting a congratulatory letter to UN Deputy Secretary-General, Amina J. Mohammed during her visit to the OSSAP- SDGs Office

The Deputy Secretary General of the United Nations, Amina Mohammed, has commended the Office of the Senior Special Assistant to the President, OSSAP-SDGs over the implementation of the Sustainable Development Goals, by  in Nigeria.

Ms Mohammed added that the presidential adviser has demonstrated unusual leadership in steering the implementation of the SDGs in Nigeria.

According to the DSG, “What the SSAP-SDGs has been able to do, is to build on a foundation that have been laid – that’s unusual leadership. It recognises that there was history and that there are things which have been done which Nigerians are benefitting from. What the SSAP has done is to take it to a different level.”

Amina Mohammed  was particularly impressed with the efforts of the OSSAP-SDGs to ensure that required data are provided for effective planning, tracking, monitoring and evaluation.

She described the baseline study, the re-alignment of the National Statistical System and the signing of Data Bond with Ministries Departments and Agencies of the Federal Government and the Government at the Sub-National level carried out by the OSSAP-SDGs, as remarkable achievements.

The Data Bond is designed to help provide accurate statistics for more effective implementation of projects and policy formulation.

The UN DSG, who is also the Chair of the UN Sustainable Development Group further showered encomiums on Princess Adejoke Orelope-Adefulire and her team for their innovative approach to the 2030 Agenda, particularly the provision of pro-poor and pro-development programmes  and initiatives as well as establishment of a robust institutional arrangement for the implementation of the goals across the country.

Speaking during at the occasion, Princess  Orelope-Adefulire described the visit as a ‘rare privilege and full circle moment’ due to the fact that  Ms. Mohammed was the first occupant of the Office – in her capacity then as the Senior Special Assistant to the President on Millennium Development Goals.

“You were instrumental in setting a standard institutional framework, leaving a lasting legacy which aided the transition to the SDGs in Nigeria. I commend you for your incredible leadership as SSAP-MDGs; and at the global level, for your coordination efforts on the transition, as the Special Advisor to the UN Secretary-General on Post-2015 Development Planning,” Orelope-Adefulire said in her welcome address.

In what turned out to be double-fold celebrations, the UN Deputy Chief marked her Diamond Jubilee as she turned 60 on the 27th of June, 2021. Earlier in the same month, the UN Secretary-General, Antonio Guterres had also nominated her for a second term.

During the visit, Amina Mohammed was presented a congratulatory letter and a plaque in recognition of her outstanding leadership and commitment to the transformative promise of the 2030 Agenda.