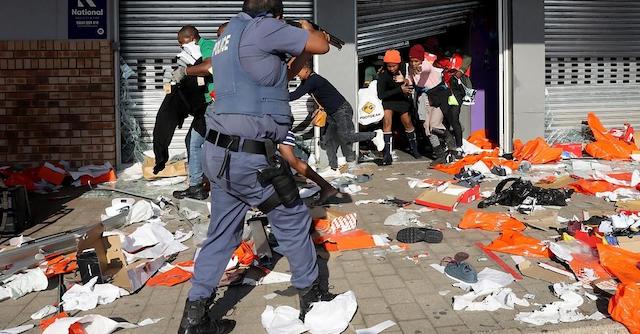 A policeman tries to control looting by Zuma rioters

Riots provoked by the imprisonment of former president Jacob Zuma spread to Durban on Tuesday, from Zuma’s home in KwaZulu Natal and Gauteng.

Crowds clashed with police and ransacked or set ablaze shopping malls in cities across South Africa, with dozens of people reported killed.

About 45 people were killed as against official death toll of 10.

The riots have been some of the worst violence in South Africa in years.

Despite President Cyril Ramaphosa’s plea for calm and the need to respect the constitution, the protests overnight widened into an outpouring of general anger over the hardship that persists 27 years after the end of apartheid.

The hardship was exacerbated by COVID-19 restrictions.

Security officials said the government was working to halt the spread of the violence and looting, which has reached the Indian Ocean port city of Durban.

“The violence could have been avoided. It started with the decision of the constitutional court to detain president Zuma … This is what gave anger to the people,” a spokesman for the foundation told Reuters separately.

Outside a Durban warehouse of retailer Game, looters stuffed cars with electronic goods and clothes, a Reuters witness said.

Inside, the floor was a mess of discarded packaging as the crowd emptied the shelves.

The rand , which had been one of the best performing emerging market currencies during the pandemic, dropped to a three-month low on Tuesday, and local and hard currency bonds suffered.

At least 45 people have so far been killed during the unrest, 19 in Gauteng and 26 in KwaZulu-Natal, according to state and provincial authorities.

Shops and petrol stations have been forced to close while on the streets protesters have hurled stones and police responded with rubber bullets, Reuters journalists said.

A clothing factory providing 600 jobs in Isithebe, north of Durban, would be forced to close as all its machinery and materials had been looted, a textiles union said.

Cele told a news conference that 757 people had been arrested so far and said that no one would be allowed to “make a mockery of our democratic state”.

“No amount of unhappiness or personal circumstances from our people gives the right to anyone to loot,” he said, echoing sentiments expressed by President Cyril Ramaphosa overnight.

However, Defence Minister Nosiviwe Mapisa-Nqakula, speaking at the same news conference, said she did not think a state of emergency should be imposed yet.

The legal proceedings against Zuma have been seen as a test of post-apartheid South Africa’s ability to enforce the rule of law.

But any confrontation with soldiers risks fuelling charges by Zuma and his supporters that they are victims of a politically motivated crackdown by his successor, Ramaphosa.

Judgment was reserved until an unspecified date.