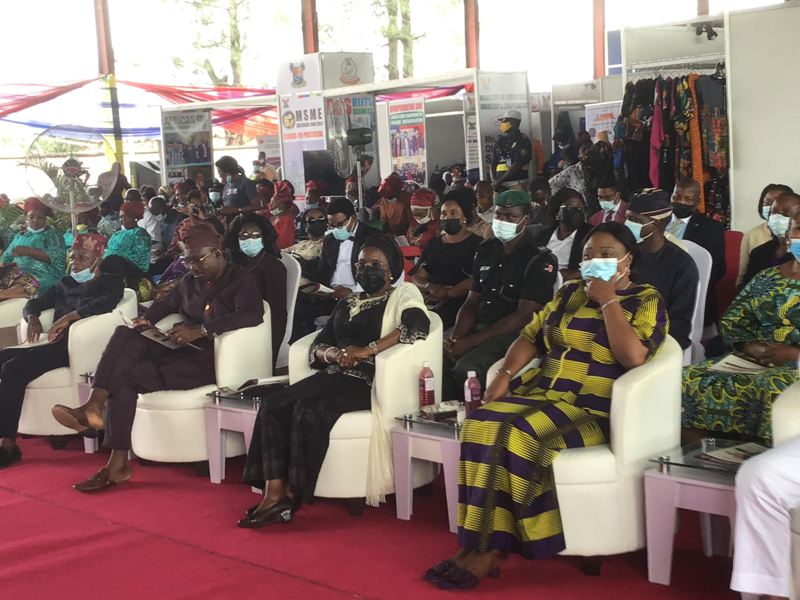 Akande and other top government officials at the event

Lagos State Governor, Babajide Sanwo-Olu on Tuesday disclosed that his administration has invested over N103 billon in the provision of infrastructure to provide downstream contracts for Micro, Small and Medium Enterprises (MSMEs).

The governor spoke at the 6th Edition of the Lagos MSMEs Exclusive Fair held at Ikeja, with the theme: ”Effect of COVID-19: Charting the Way Forward for MSMEs.”

According to him, the state government was passionately committed to the growth of small businesses, saying that government recognised the role of the MSMEs in economic emancipation and their pivotal spot in the social economic development of the state.

Sanwo-Olu, who represented by the Secretary to the State Government (SSG), Mrs Folashade Jaji, stated that everyone had the collective responsibility of ensuring that MSMEs successfully overcome the economic and growth challenges posed by the COVID-19 pandemic.

According to him, in the last two years, government had committed significant resources to the sustainability of the MSMEs, but that the pandemic has further exposed the need for the public and private sector to meticulously develop the capacity of MSMEs for growth and profitability.

”It is therefore, a major reason why small businesses can always count on the Lagos State Government to provide the necessary backing for trade promotion and business development.

”We extended the tax-filing deadline by 60 days and loan moratorium by 90 days to ease MSMEs’ working capital challenges.

”In addition, through the Lagos State Employment Trust Fund, we have provided low interest loans to MSMEs to the tune of N10 billion,” he stated.

Speaking at the event, Commissioner for Commerce, Industry and Cooperatives, Dr Lola Akande urged MSMEs to explore alternatives for promoting their businesses.

Akande said that the COVID-19 pandemic had necessitated the need for MSMEs to sought alternative means of promoting their businesses and remain in operation.

She said MSMEs could access online market and delivering their products to buyers/clients around the country and across the globe.

”The Micro, Small and Medium Enterprises in any economy is impossible to over-emphasise as the engine of economic growth, as this sector has contributed up to 50 per cent of the country’s Gross Domestic Product (GDP) in the last five years and provides up to 80 per cent of jobs in the country.

”Also, the United Nations (UN) records that MSMEs account for 90 per cent of businesses across the globe and provide 60 to 70 per cent of employment.

”Locally, the Nigeria Bureau of Statistics (NBS) reports that the informal sector accounts for 99.8 per cent of MSMEs, with 10 per cent of these being registered with the Corporate Affairs Commission (CAC) — primarily as business names.

”This implies that failure to bolster MSMEs will lead to loss of employment, a reduction in the spending power of the average citizen and ultimately, an exponential increase in poverty and insecurity,” Akande said.

The commissioner stated that in line with the T.H.E.M.E.S Agenda of making Lagos State a 21st century economy, MSMEs had continued to receive support from the Lagos State Government in various ways.

She said that while the government continued to work tirelessly on its own end, it was also crucial for MSMEs to look inwards, not just to survive but also thrive.

”They must consciously consider survival approaches such as adaptation and collaboration,” she said.

Special Adviser to the Governor on Commerce, Industry and Cooperatives, Oladele Ajayi, urged Nigerians to have the mindset of promoting Made-in-Lagos products by buying and using them.