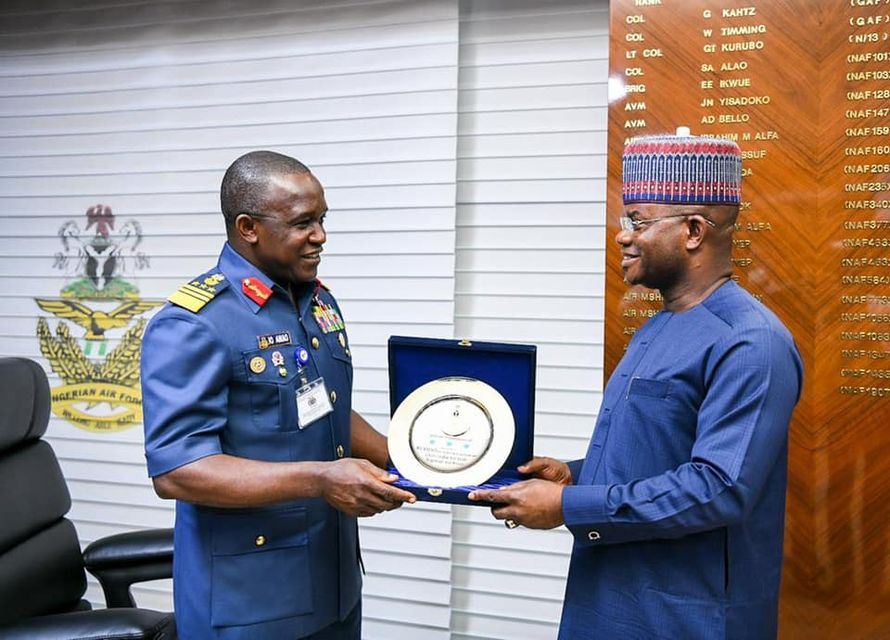 Gov. Bello visits CAS, solicits for establishment of NAF base in Kogi

The Governor of Kogi, Alhaji Yahaya Bello, has called for the establishment of a Nigerian Air Force (NAF) Base in the state.

Bello made the call when he paid a courtesy visit on the Chief of Air Staff (CAS), Air Marshal Oladayo Amao, at the NAF Headquarters in Abuja, on Monday.

the governor said the establishment of a NAF Base in the state will check the activities of bandits as well as facilitate intelligence gathering against criminal elements who have established safe haven in some parts of the state.

He also disclosed that the state had approached NAF in 2017 to consider establishing a Forward Operating Base (FOB) at a colonial-era airstrip in Zariagi, near Lokoja, to which NAF in 2018, dispatched a reconnaissance team to survey the suitability status of the location.

Bello also stated that the need to revisit the matter became necessary in view of the activities of bandits and other criminal elements who relocated to the state after military operations in September 2020 at Utu Forest situated between Nasarawa and Kogi states.

These operations, he noted, forced the criminals out of their comfort zone.

The governor also revealed that bandits fleeing from the intense firepower of the military in the North-East and North-West have so far regrouped in locations between Lokoja and Kabba/Bunu.

According to him, the security situation in these areas has forced residents of the areas to relocate to other parts of the state.

He added considering the threats posed by the criminals, coupled with the strategic importance of the state, the need to resume talks on the establishment of a FOB has become necessary.

He, however, commended the CAS for his consistent responsiveness towards the activities of insurgents and bandits.

In his remarks, the CAS commended Bello for the early detection of the activities of bandits and for his efforts at securing Kogi.

He noted that of recent, bandits and other criminal elements have become very mobile.

“Once they come under intense fire in one location, they quickly migrate to another location in search of a safe hiding place.”

He, however, assured Bello that the mandate given to him by President Muhammadu Buhari that the country must be rid of all criminal elements remains on course.

Amao added that in no distant time, the security situation in Kogi and its environs would take a positive turn.

The CAS added that the fact that an airstrip already exists in the proposed location is an advantage.