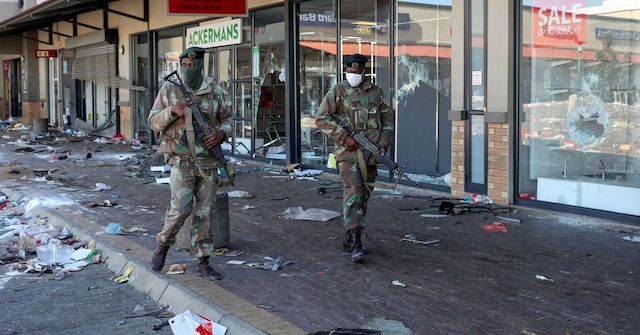 As many as 72 people have died in South Africa, following days of protest over the jailing of former President Jacob Zuma.

The South African Police Service (SAPS) which gave the figure of casualties late Tuesday also 1,234 people have been arrested .

Notably the protests have now turned into rampant looting and riots, to become the worst violence in the country since the end of apartheid in 1994.

Crowds clashed with police and ransacked or set ablaze shopping malls in cities across South Africa on Tuesday, as anger over Zuma jailing boiled over.

Security officials said the government was working to halt the spread of the violence and looting, which has spread from Zuma’s home in KwaZulu-Natal (KZN) province to the country’s biggest city Johannesburg and surrounding Gauteng province, and to the Indian Ocean port city of Durban.

There have been reports of sporadic violence in two others provinces as well and “law enforcement officers patrolling identified areas of threat in an effort to deter possible opportunistic criminality,” SAPS said.

“The violence could have been avoided. It started with the decision of the constitutional court to detain president Zuma … This is what gave anger to the people,” a spokesman for the foundation, Mzwanele Manyi, told Reuters separately.

Outside a Durban warehouse of retailer Game, looters stuffed cars with electronic goods and clothes, a Reuters witness said. Inside, the floor was a mess of discarded packaging as the crowd emptied the shelves.