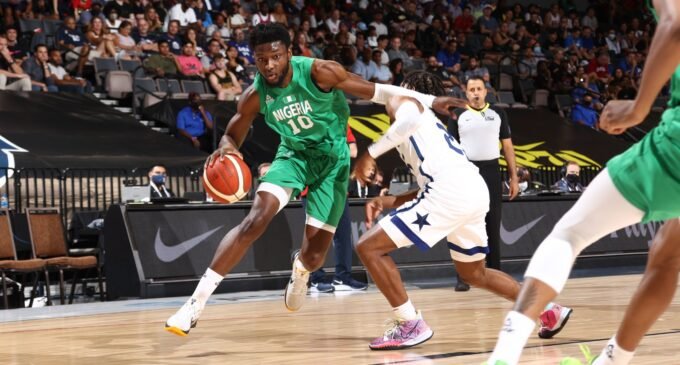 The loss followed stunning victories by the team against U.S.A and Argentina.

The Australians dominated the game displaying grit and technical prowess as they ripped D’Tigers apart right from the beginning.

D’Tigers could not still find their foot in the second quarter as Australia continued dominating.

They extended their lead in the second quarter with 20 points ending the game 49-29.

The third quarter ended with the Aussies still dealing a blow to Nigeria 84-46, as they capped the game clocking the 100-point mark to win by 39 points ending the game 108-69.

It was the first loss for Mike Brown since taking over as coach of D’Tigers in 2020.

Australia, ranked third best basketball team in the world are yet to lose any game since the exhibition began.

It was the first loss for team Nigeria since the Olympic preparation games began.

Before the game, the team paid tribute to Nigerian music legend, Olanrewaju Fasassi, who died on Sunday after battling “angioimmunoblastic t-cell lymphoma”, a rare form of cancer.

Sound Sultan was an ardent fan of basketball even before he became a music star who contributed to the development of the sport in Nigeria.

D’Tigers before their game against Australia wore a shirt with the picture of the music legend and also observed a one-minute silence in his honour.