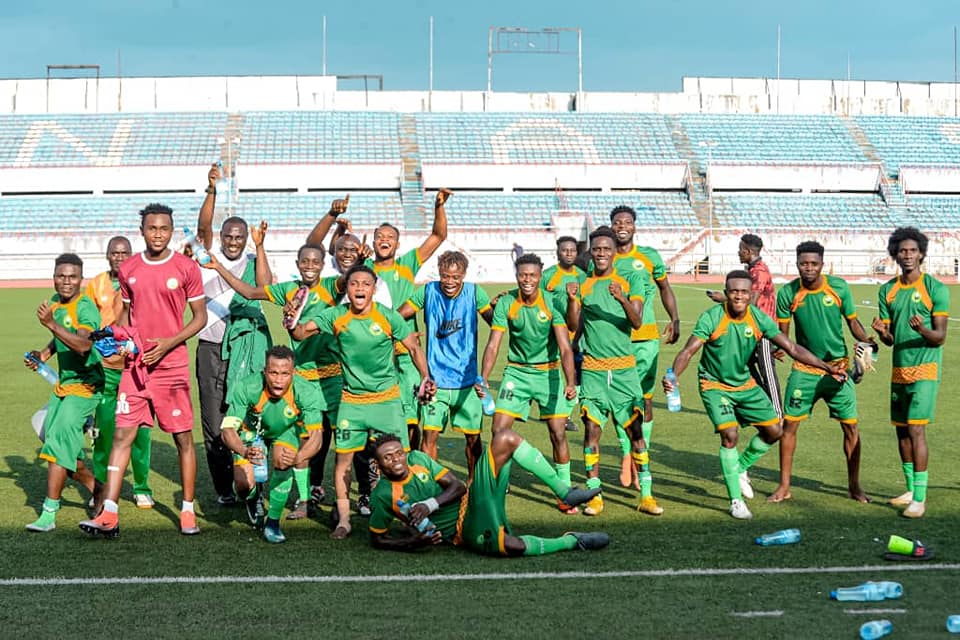 Gateway Utd on Wednesday continued their giant-killing run as they edged past Wikki Tourists To Reach Aiteo FA Cup quarterfinals.

It was another moment to savour as the Abeokuta team defeated Nigeria Professional Football League side, Wikki Tourists 4-3 on penalties.

In an encounter largely dominated by Gateway United, the team started on a positive note as Haruna Salifu was brought down in the area when fed by Julius Ikechukwu.

Michael Okolo tried his luck from way out but ball went off target in the 8th minute of play.

Ikechukwu Julius had another missed opportunity when he cut in from his left, wriggled his way past the Wikki defence but saw his curler go agonisingly wide.

The missed chances would not end there as Haruna Salifu hit a low drive which was comfortably handled by Wikki goalkeeper, Alladoun Kolimba.

Yet again, in the 39th min, Haruna Salifu was through on goal, hit a first time ball which goalkeeper parried to him, only to see his effort saved at the second time of asking.

With five minutes before the break, Sunkanmi Odusina ran his way into the left channel but saw his effort inches away from goal as the first half ended goalless.

It was with the same intensity the team started with in the second half when Michael Okolo’s cross flashed across goal, Haruna Salifu could not connect.

On the hour mark, Wikki Tourists were reduced to 10 men, Salisu Adamu was sent off for a second bookable offence after impeding Julius Ikechukwu.

In the last 20 minutes, Wikki Tourists kept up the pressure even with a man down but Gateway United maintained their shape and tactics as there was to be no goal to separate the two teams.

The match went into penalties.

Despite starting with a miss from Abawula Anthony, the Gateway team was able to triumph 4-3 after Wikki Tourists goalkeeper had his penalty saved by Ibukun Araromi.

Gateway Utd have now equalled its best run of a last 8 finish in 2014 and will now play Bayelsa Utd in the quarterfinal, in a soon to be communicated venue and date.