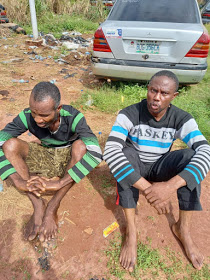 Felix Alika, a security staff of one of Nigeria’s leading banks has been arrested by operatives of Ekpoma Division of Nigerian Police, for allegedly conspiring to kidnap his manager.

Alika was arrested with another co-conspirator, Basiru Suleiman, following a tip-off by one of the would-have-been collaborators, simply identified as Akhere.

It was gathered that Alika had been having a running battle with his Manager over his promotion in the bank.

The Manager took some decisive decisions on the security man, following his insubordination.

Not happy with the action of his boss, Alika who came up with plans to kidnap him, mandated Suleman to recruit other gang members to kidnap his boss.

Suleman, in turn, recruited Akhere to join the kidnap gang.

Bubble, however, burst few days to the operation, when Akhere changed his mind and reported the matter at the Ekpoma Police Division.

Following his arrest, the unrepentant security staff allegedly accused his boss of being a criminal.

Alika who confessed to hatching a plan to kidnap his boss added: “Yes, l can confirm that the bank manager and myself have been having quarrel for some time now.”

The State Police Command Public Relations Officer, SP Kontongs Bello, who confirmed the report, added that the two suspects would be charged to court for attempted kidnap.

“The report from Anti-kidnapping squad in our Command said the security guard, Felix Alika, lied against the manager” Bello said.