The Kremlin papers: How Putin put Trump in White House 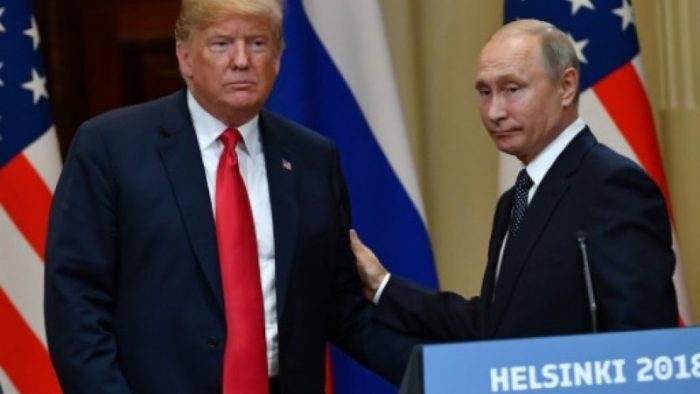 Trump and Putin in Helsinki

The Guardian of London on Thursday 15 July published a scoop the world had been waiting for: Russia’s role in the emergence of former President Trump as U.S. leader in 2016.

With the way Trump deferred to Putin in at least one public meeting in Helsinki and his enthusiasm in defending Russia, while discrediting American intelligence, there were suspicions that the Russians had something damaging on Trump.

The Guardian report confirmed all these and provoked a ballistic reaction, across the seas from Trump, according to a statement by spokesperson, Liz Harrington.

“This is disgusting. It’s fake news, just like RUSSIA, RUSSIA, RUSSIA was fake news. It’s just the Radical Left crazies doing whatever they can to demean everybody on the right.

“And the world was a much safer place than it is now with mentally unstable leadership.”

But up till now, the Guardian has not recanted and indeed double down on Friday restating its story, which we share below:

In January 2016, America was coming to terms with what had previously seemed incredible. Barring an unforeseen event, Donald J Trump was on course to become the Republican party’s presidential candidate. Some welcomed this giddy prospect, while others in the Republican establishment recoiled in horror.

The man himself oozed confidence. “I have a feeling it’s going to work out, actually,” he told his rival Ted Cruz, at a Fox News debate. By 22 January, the polls had Trump well ahead, as a snowstorm nudged towards Washington.

Trump’s astonishing and confounding rise had not gone unnoticed in Russia. Unbeknown to the US public, his personal lawyer, Michael Cohen, was in touch with the office of the Kremlin press secretary. Cohen had begged for help in building a luxury hotel in Moscow – a decades-long Trump dream.

Meanwhile, Trump had said flattering things about Vladimir Putin, a person talked about by some leading US politicians as a cold-eyed KGB killer. “Wouldn’t it be great if we got along with Russia,” Trump would muse.

That he was the Kremlin’s preferred candidate is not in doubt. What has been a source of endless conjecture is the lengths Russia was prepared to go to to help Trump win. The Guardian has spent months seeking to verify the authenticity of papers that may provide an answer to this question.

Our investigation has revealed that western intelligence agencies have known about the papers – and have been examining them – for some time.

Independent experts approached by the Guardian have also confirmed they are consistent with the Kremlin’s thinking and chain of command.

Their fascination in material that appears to have come from within the heart of the Kremlin is easy to understand.

The papers suggest that as Trump surged ahead, a group of analysts inside the Russian administration were putting the final touches on a secret paper.

The title of the document was bland enough: “Report on strengthening the state and stabilising the position of Russia under conditions of external economic constraint.”

Its contents were not.

The document describes how Putin’s expert department was urging a multi-layered plan to interfere in the race for the White House. The goal: to “destabilise” America.

One candidate above all might help bring this about, the experts confidently believed – the “mentally unstable”, impulsive” and “unbalanced” Trump.

This plan was presented as being entirely defensive. The Obama administration had inflicted damage on the Russian economy by imposing sanctions. Living standards were falling, regional elites were unhappy and the sugar rush from Putin’s 2014 annexation of Crimea had worn off, the report said. Potential domestic political dangers lay ahead.

The sensible course from Moscow’s perspective, it said, was to enact measures that would “pressure” America to ease off – by dropping anti-Russian sanctions, or softening them.

The paper seems to have set off a flurry of activity in the Kremlin.

The documents indicate that on 14 January Vladimir Symonenko, the expert department chief, shared a three-page summary.

“At the moment the Russian Federation finds itself in a predicament. American measures continue to be felt in all areas of public life,” it starts. Next, Putin ordered the head of his foreign policy directorate, Alexander Manzhosin, to arrange an urgent meeting of the national security council, Russia’s top decision-making body. At some point over the next few days Putin appears to have read the document himself.

By 22 January, other security council members had had a chance to digest its contents. The early part dealt with Russia’s economy. The secret American measures were contained in a special section beginning on page 14.

The report seemed to confirm what Trump would later deny: that Putin’s spy agencies had gathered compromising material on him, possibly stretching back to Soviet KGB times.

Trump’s personal flaws were so extensive – also featuring an “inferiority complex” – that he was the perfect person to feed divisions and to weaken America’s negotiating position.

The unflattering assessment of Trump’s personality was based on evidence, the paper said, derived from observation of his behaviour during trips to Russia.

Trump visited communist Moscow and Leningrad in summer 1987 following an invitation from the Soviet envoy in New York. Trump returned in the 1990s, and early 2000s, seeking business deals, and flew in for the 2013 Miss Universe beauty contest, when he stayed in Moscow’s Ritz-Carlton hotel. Putin’s FSB agency had spy cameras in guest rooms, and a full-time officer on the premises, the Senate intelligence committee later found.

The report appears to confirm Trump was being watched, though no dates or locations are given.“Considering certain events that took place during his stay on Russian Federation territory (Appendix 5 – personal characteristics Donald J Trump, paragraph 5), it is urgently necessary to use all means to promote his election to the post of President of the United States,” it says.

The allegation that the Russians had kompromat on Trump would haunt his four years in the White House. True or false, his flattering treatment of Putin was one riddle of his chaotic presidency.

The papers seen by the Guardian suggest that after the security council meeting Putin set up a special inter-departmental commission headed by his close ally Sergei Shoigu, Russia’s defence minister. Shoigu was in overall command of the operation to influence the 2016 US election. GRU military intelligence, SVR foreign intelligence and the FSB were all told to prepare immediate practical steps to help accomplish the report’s preferred scenario – a Trump victory.

Read the rest in The Guardian