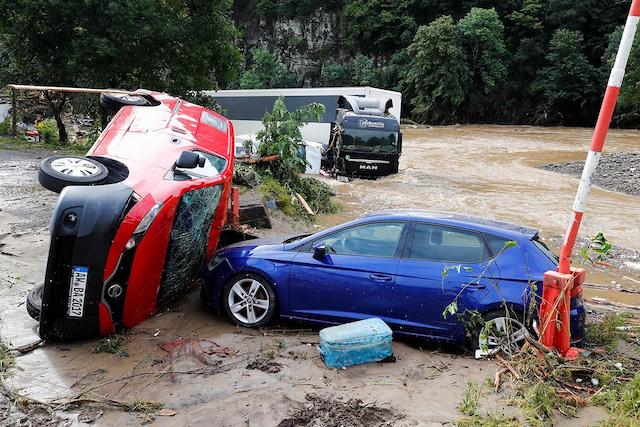 The ruins left by devastating flood in Germany and Belgium

The death toll from devastating floods in Germany reached 133 on Saturday, police said.

This increased the total number of those killed in Europe to 153.

“According to current information, 90 people lost their lives during the disaster” in the Rhineland-Palatinate region, one of the worst hit, police in the city of Koblenz said in a statement.

A further 43 people have died in the neighbouring North Rhine-Westphalia, and 20 in Belgium.

Communications were cut in many areas and entire communities lay in ruins after swollen rivers tore through towns and villages in the western states of North Rhine-Westphalia and Rhineland-Palatinate as well as parts of Belgium and the Netherlands.

After days of heavy rain, Germany has now recorded its largest death toll ever in a natural disaster in almost 60 years.

Among the dead were 12 residents of a home for disabled people surprised by the floods during the night.

The flooding was a “catastrophe of historic dimensions,” said Armin Laschet, state premier of North Rhine-Westphalia and the ruling CDU party’s candidate to replace Chancellor Angela Merkel when she steps down after an election in September.

The devastation of the floods, attributed by meteorologists to a climate-change driven shift in the jet stream that has brought inland water that once stayed at sea, could shake up an election that has until now seen little discussion of climate.

“It is a sad certainty that such extreme events will determine our day-to-day life more and more frequently in the future,” Laschet said, adding that more measures were needed to fight global warming.