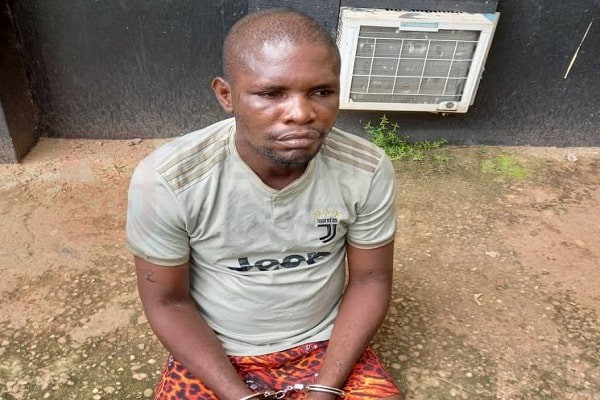 A 42-year-old man who allegedly specialised in trailing and robbing bank customers who made large withdrawals has been arrested by operatives of Edo State Police Command.

The suspect, John Ayenu, who was arrested during the week, while carrying out his nefarious activity in Uromi, Esan North-East Local Government Area of the State, belongs to a three-man gang terrorizing Irrua, Uromi, Ubiaja and other communities in Edo Central.

It was gathered that the suspect and two others now at large, always stationed themselves at the premises of banks, with one of them stationed inside the banking hall, pretending to be genuine customer carrying out banking transaction.

Nemesis however caught up with the suspect, when, they met their match in a serving policeman in mufti, who just withdrew a large sum of money.

Upon coming out of the banking hall, the victim put the money under the seat of his car and drove off, unaware that he was being trailed.

Ayenu and his other gang members followed their victim from the bank to Uromi-Irrua Road, where they intercepted and attacked him.

The victim however resisted them, raised the alarm, which attracted attention of residents and members of vigilante in the area, who gave them a hot chase.

The suspect was arrested at the scene while his gang members escaped on their motorcycle.

Ayenu who confessed to the crime, explained that they came all the way from Imo State to carry out robbery operations in Edo.

“I am from Imo State. We came to Edo to monitor people withdrawing money from the bank. We usually break into the car to collect the money and run away.

“I could not run far because l fell when they were pursuing me as my two other members escaped with the Motorcycle we used. I have a wife and two children in Imo, and l stay in the hotel anytime l come to Edo state.

“I never knew the man is a policeman. He refused to give us the money, and he started fighting us and shouting for people to come,” he said.

The State Police Command’s spokesman, SP Bello Kontongs, was not available for reaction to the report.