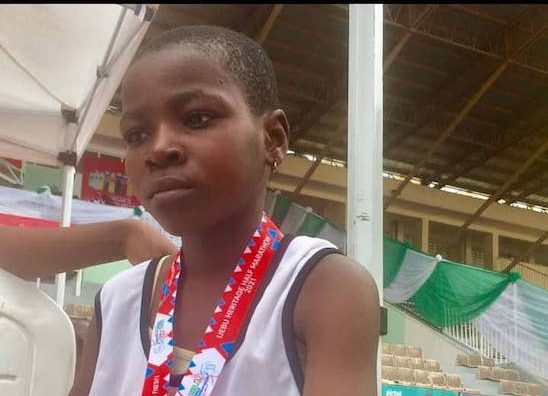 Eleven-year-old Abigael Ogunbowale earned herself a N250,000 gift for braving the odds to complete the 21km Ijebu Heritage Half-Marathon on Saturday.

Ogunbowale like the others finished the race at the Otunba Dipo Dina Stadium, Ijebu-Ode in Ogun.

The young girl, registered for the half-marathon, proved doubters wrong about her resilience.

Ogunbowale was instantly rewarded by the Chief Executive Officer (CEO) of Rite Foods, Saleem Adegunwa, who was one of the race’s co-sponsors.

Adegunwa praised the girl for her courage in the maiden marathon.

He said the next edition would be better.

“By DNA in Nigeria, we are good at sports, we just need to harness it so we can go international with it.

“I was not surprised today to see a 55-year-old and 11-year-old finishing the race,” he said.

Adegunwa also noted that Nigeria is naturally blessed with talents and they would continue to get more backing from his company.

“We intend to do more in sports, with the Abeokuta Marathon also coming up later in the year, and we are looking forward to more like that,” he said.

Femi Olusanya, a police officer from Ijebu-Ode, came first among the indigenous runners who finished the race.

Kenya’s Hosea Kiplimo won the half-marathon with the time of 1 hour 02 minutes 36 seconds and got the cash prize of 10,000 dollars.

Timothy Ronoh, also from Kenya, won the third-place prize with 1:02:59, with Keneth Kiprop in fourth, while John Muriuri came fifth.

In the Female category, Kenya’s Sandra Chebet returned the time of 1:10:42 to emerge winner.