You are my son: Primate Ayodele replies Femi Adesina 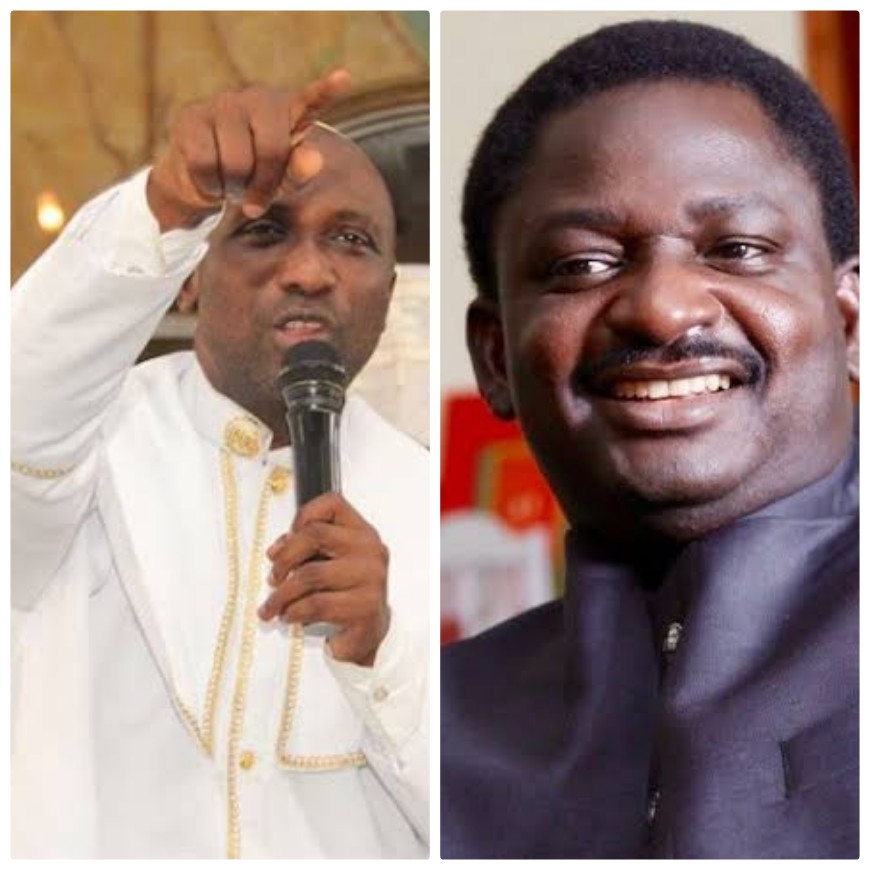 The Leader Of INRI Evangelical Spiritual Church, Primate Elijah Ayodele said he will not join issues with the presidency after Femi Adesina flayed his prophecy about Nigeria’s breakup.

‘’Femi Adesina is my son, I can’t join issues with him. I understand he is only trying to defend his pay masters”, Ayodele said in his sermon on Sunday.

“I am not angry with him. I’m not bothered by his claims against my prophecies but there is a need to lecture him with facts”.

Ayodele made his breakup prophecy last week during the launch of his annual book of prophecies, titled Warnings To The Nation”.

He said that Nigeria’s Breakup will happen without war, but with ease before 2040.

The presidency in a swift reaction through Femi Adesina, the special adviser on Media and Publicity described Primate Ayodele’s prophecy as fake.

He claimed Ayodele had made several prophecies that didn’t come to pass.

During his sermon today, Ayodele explained that Femi Adesina is his son and that he could not join issues with him because he understands that He is only defending his paymasters.

He revealed that the Prophecies Femi Adesina claim didn’t come to pass never came from him, making it known that the President’s aide should have done his investigations before laying such claims.

He noted that it’s too early to kick against his prophecy on Nigeria’s breakup.

He urged Adesina him to wait till then before describing it as fake.

“Femi Adesina failed journalism by not doing proper investigation before describing my prophecies as fake.’’

‘’He claimed that I said Goodluck Jonathan was going to win in 2015 , PDP will win some states which they didn’t later win, the death of Buhari which didn’t happen, and many others.

“Unfortunately, all Femi Adesina said were pure lies. It is on record that I prophesied the victory of President Buhari, prayed for Buhari’s return from his long medical vacation, loss of PDP in those states he mentioned.

“These can be found in national newspapers’’

‘’If Femi Adesina saw anything contrary to this, it simply means He didn’t do his investigations properly and paid attention to hearsays instead of going after facts.

“Well, He is now a big boy and can’t go through the stress of investigating properly’’

‘’He claimed all my prophecies are negative but where was he when I prophesied the death of Abubakar Shekau earlier this year?’’

‘’On my prophecy about Nigeria’s break up before 2040, Femi Adesina should wait till then before describing this prophecy as false. I didn’t prophesy out of my intelligence or knowledge but according to the spirit of God’’

‘’Femi has been in the team of pulling down men of God for so long but He is my boy, He can’t pull me down at all.

“This ministry is built on prayers. He has interviewed me before, we have met and I even prayed for him some years back’’

‘’Before Buhari became president, I told him personally that He would someday become President when he was in ANPP. Femi was not even there but he can verify this from the President.

“Femi is one of the people I have prayed for to become great in life, I don’t even see his criticism against me as an Insult, it only means the Presidency are paying attention to the warnings of God, just that they are going about it the wrong way’’

‘’Femi is not the one to say who a prophet is, I don’t want to join issues with him, He is my boy, he is just being used by his paymasters and I am not bothered about it. He should apologize to his masters and to God for lying against me’’

‘’Nobody can keep my mouth shut. I will continue saying whatever God asks me to say, he claims prophets see nothing, He should leave the prophets alone and wait if their prophecies will come to pass or not.’’

‘’I will not say what they want to hear, I will tell them what God says I should say, I am not angry with Femi, I won’t pray against him, like I said, Femi is my son, my friend and my reporter. He only wrote what he feels, not what he knows, I’m not angry with him. Prophecies can only be understood by those in the spirit, not an honorary deacon like Femi’’

‘’It’s not a new thing that a prophet gets criticised, prophets of old were hated, thrown to prison because their word of prophecy didn’t favour the leaders but we all know the end of it’’

‘’I can’t join issues with Femi Adesina, He is my son, He is only defending his pay masters but I will implore him to do proper investigation before laying further claims’’