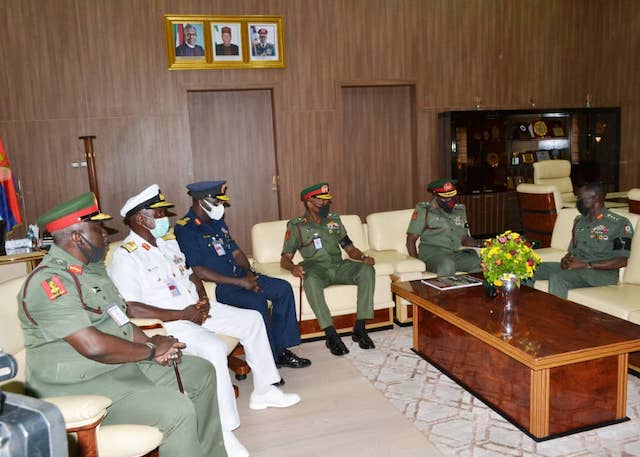 Yahaya, second right, Irabor, first right, with other military chiefs at the office of CDS

The Chief of Defence Staff (CDS), Gen. Lucky Irabor, has solicited inputs from all stakeholders to contain the security challenges across the country.

Irabor spoke on Monday in Kaduna, when he met with retired military officers from North West geo-political zone.

He noted that ex-servicemen stood a better chance to appreciate the challenges because of their wide contacts and interactions with members of society.

According to him, the inputs gathered will help the armed forces improve significantly in their operations.

Irabor also expressed the hope that the engagement would result in having a better security environment where every life and property would be protected.

Earlier, the General Officer Commanding (GOC) 1 Division, Maj-Gen Danjuma Ali-Keffi, noted that Nigerians had been passing through challenging times, especially those vested with the responsibility of defence and security.

Ali-Keffi said Kaduna and Niger states in particular, had recorded disturbing levels of attacks and kidnapping in vulnerable communities and schools.

He said that the Division’s efforts in confronting those threats, were beginning to yield the desired results by significantly degrading the bandits and facilitating the return of civilians to previously abandoned communities.

The GOC assured that no stone would be left unturned until Nigerians were able to go about their legitimate businesses without fear of intimidation.

He commended the CDS and other service chiefs for their relentless efforts and giving the required support to the troops.

The GOC also commended the retired military officers for their zeal in providing valuable information and tips to the Division, which had aided its operations.