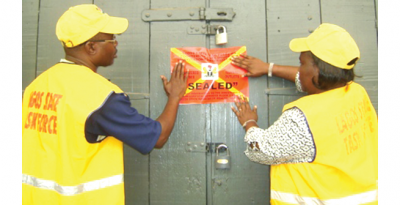 Mr Seyi Alade, LIRS Director of Legal Services said during the state-wide enforcement had resolved to wield the stick on defaulters who insist on shortchanging the state government.

He said the affected companies failed to meet up with March 31 deadline.

“Now, the service has resumed sealing of firms particularly the hospitality firms; it is committed to continuing the exercise until full compliance to tax payment and remittance are achieved,” Alade said.

He said the firms sealed were restaurants, hotels and guest houses.

He said that the others included Citi View Hotel, Kamal’s Crib, 7th Heaven and Infinity Platinum Bar and Restaurant.

Alade said the tax liabilities of the affected firms covered from 2013 to 2020.

“Before LIRS embarks on sealing, it must send two letters to the management of the affected firm, reminding it of tax liabilities.

“Both the demand notice and letter of intention to distrain were sent to the management of the hospitality firms but they failed to act,” he said.

Alade claimed that less than 65 per cent of the corporate organisations operating in the state paid taxes, saying that many of them operated without any tax remittance to the government.

He called on companies to ensure up-to-date tax payments.

Alade said that the government was working tirelessly to provide a conducive environment for businesses in the state.

According to him, LIRS is deploying an aggressive approach to ensure that all taxes are collected to help the state carry out its developmental projects for the benefit of Lagosians and the country at large.

Alade said that LIRS was currently running an initiative called ‘IBILE’ to get more taxpayers into the tax net.

The “IBILE” strategy is an electronic platform that represents the divisions in Lagos – Ikorodu, Badagry, Ikeja, Lagos and Epe (IBILE).

Alade added that the agency was profiling both individuals and corporate entities daily to get more people into the tax net.

“Our mission is to ensure that every taxable adult resident in Lagos State is captured into the tax net, ” he said.

However, some of the affected firms made payments regarding their liabilities in the course of the distrain/enforcement and paid an additional N250,000 as the cost of the distraint.