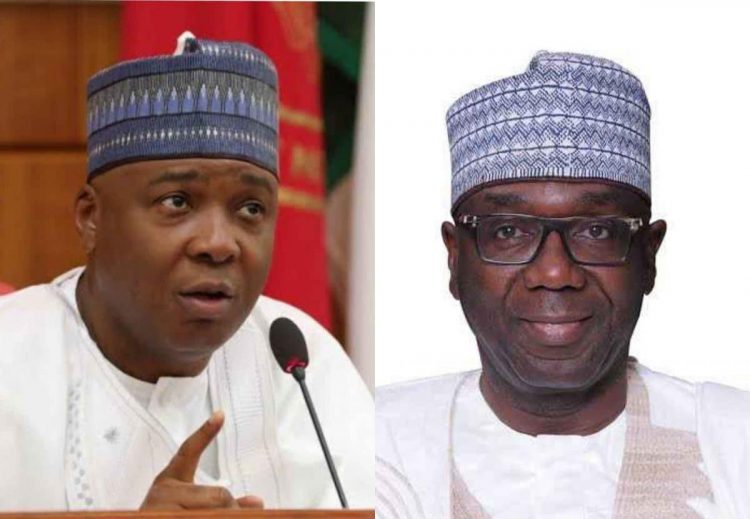 But it came with politics on the side, as hundreds cheered Saraki in and out of the prayer ground, chanting ‘Sai Buki’.

Senator Bukola Saraki enjoyed the adulation as he also waved back feverishly to his fans.

In a post on Facebook later, he wrote: “Thank you Kwara!
#EidMubarak to you and your family!”

Governor AbdulRazak was similarly welcomed to the Eid ground with chants of ‘Sai Rahman’.

Both Saraki and AbdulRahman belong to different parties, with Saraki in PDP and AbdulRazaq in APC.

At the Eid ground, AbdulRazaq, Saraki and Senator Oloriegbe, who replaced Saraki in the National Assembly, observed the two raka’ats prayer to commemorate this year’s Eid-el-Kabir.

The two raka’ats superogatory prayer, which lasted for less than 10 minutes, was led by the Chief lmam of llorin, Alhaji Mohammed Bashir.

The Chief lmam later slaughtered his sacrificial ram at the Eid playing ground immediately after the prayer and his sermon to allow other Muslim faithful offer their sacrifice.

Bashir in his sermon admonished muslims to imbibe the virtues of Prophet Ibrahim by being obedient to constituted authority.

He urged Nigerians to shun destructive tendencies capable of retarding the growth and development of the nation.

The Emir of llorin and Chairman, Kwara council of traditional rulers, Alhaji lbrahim Sulu-Gambari, in his remark urged Nigerians to heed to experts and government advice against the outbreak of Coronavirus pandemic.

The traditional ruler however called on the federal government to adopt more proactive measures against COVID-19 to ease its effect on the economy and humanity.