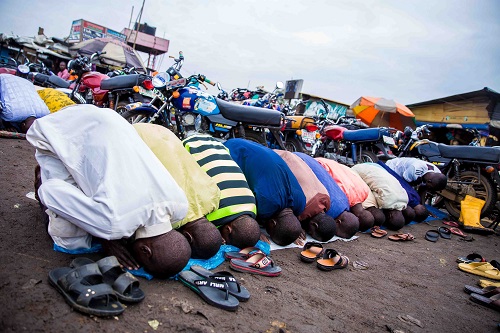 Hundreds of Muslims on Tuesday gathered at the Kara market mosque, for prayers to commemorate this year’s Eid-el-Kabir.

The worshippers, mostly from the northern part of Nigeria offered their Rakat prayers at the Kara market mosque, located between the Lagos and Ogun state border end of the Lagos-Ibadan expressway to commemorate the celebration.

Also, last-minute shoppers were seen rushing into the market trying to negotiate good prices for rams and cows before the prayers started around 9:30 am.

Those who couldn’t make it into the mosque had to occupy the nearest space they could find, including the roads to join in the prayers which lasted between 5-10 minutes.

Children and women in their colourful attires were also seen thronging towards the worship center to join the adult males.

After the prayers, the Chief Imam, of the mosque, Usman Khalid led some officials and the congregation to slaughter two rams as part of the annual rituals.

See some photos by Ayodele Efunla from the celebration below.