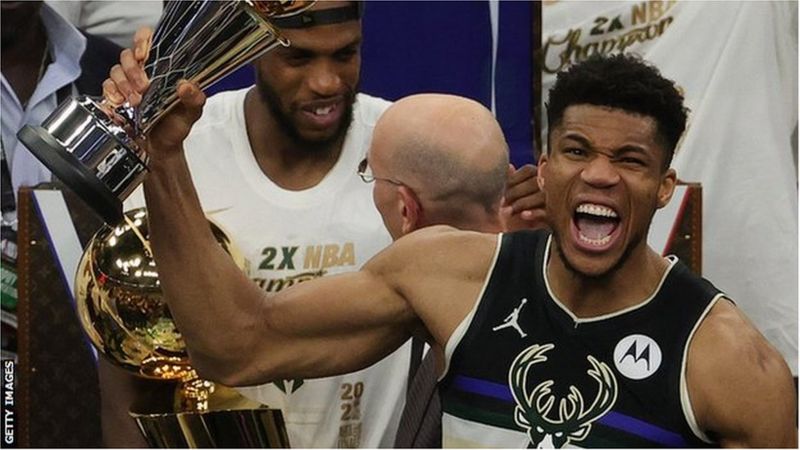 The Milwaukee Bucks, powered by a masterpiece from Greek-Nigerian forward Giannis Sina Adetokunbo Antetokounmpo, ended their 50-year wait for a second NBA championship with a 105-98 win over the visiting Phoenix Suns on Tuesday.

With the victory, the small-market Bucks clinched the NBA Finals 4-2 and became only the fifth team to win the best-of-seven championship series after losing the first two games.

Antetokounmpo was named most valuable player of the series, making him only the fifth international winner, after scoring a playoff career-high 50 points in the clinching game that will surely soothe the Bucks’ recent history of playoff letdowns.

It’s been quite a stretch for Antetokounmpo, who during his eight years in the league has collected two NBA MVPs and a Defensive Player of the Year Award, with three all-NBA first-team selections in the last three years alone.

This year, he added both the Larry O’Brien Trophy (NBA championship) and the Bill Russell Award (NBA finals MVP).

“This is a feeling, like this is an addictive feeling,” Antetokounmpo, who was born in Greece to Nigerian parents, told reporters.

Phoenix overcame a slow start and led by as many as seven points early in the third quarter but could not contain the dominant and determined Antetokounmpo down the stretch.

For Phoenix, who were seeking their first championship in the team’s 53-year existence, the defeat marked the first time all season they have lost four consecutive games.

Unlike last year’s NBA Finals when the celebratory screams of the Los Angeles Lakers echoed across an arena void of fans due to the COVID-19 pandemic, the Bucks’ win kicked off a wild party for both a capacity crowd of 17,000 inside and the 65,000 supporters who attended a watch party outside the arena.

For the 26-year-old forward captured his first NBA title Tuesday night with a jaw-dropping 50-point performance that led the Milwaukee Bucks to a 105-98 win and sealed a six-game series victory over the Phoenix Suns.
But hardware isn’t the only thing he’s likely to gain from the championship win, which experts say will unlock an endorsement avalanche.

“It takes him to the next level,” says Dr. Tim Derdenger, an associate professor at Carnegie Mellon’s Tepper School of Business. “A [championship] ring will open many new and lucrative doors.”

Antetokounmpo joined the NBA from Greece in 2013 and in just a few years rose to become one of the league’s biggest names, signing a five-year, $228 million extension with the Bucks in December. He also earns some $25 million annually in endorsements, with partners that include Nike, JBL and Budweiser in the U.S., as well as Sarantis and Protergia in Greece. That’s the fifth-highest off-the-court haul in the NBA, according to Forbes’ data. Derdenger estimates that number could climb to between $35 million and $40 million based on Antetokounmpo’s success and international appeal, bringing him within range of Stephen Curry.