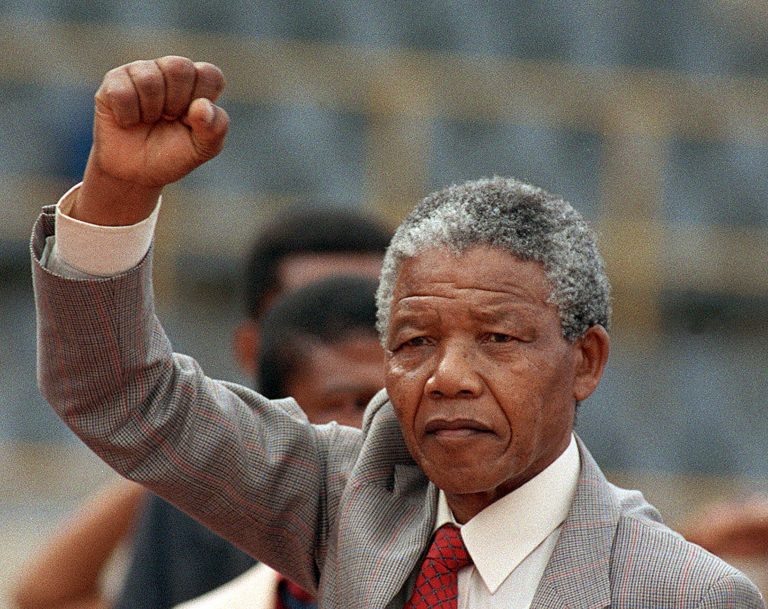 Anti-apartheid leader and African National Congress (ANC) member Nelson Mandela raises a clenched fist, arriving to address a mass rally, a few days after his release from jail, 25 February 1990, in the conservative Afrikaaner town of Bloemfontein, where ANC was formed 75 years ago. (Photo by TREVOR SAMSON / AFP) (Photo by TREVOR SAMSON/AFP via Getty Images)

She described him as exemplifying “courage, compassion and an unwavering commitment to social justice and equality”.

Mohammed told the UN General Assembly on Wednesday in New York at a special session held to celebrate Mandela, the man who led the struggle that ended the racist apartheid system in South Africa.

Celebrating Mandela International Day – officially commemorated on July 18 – the UN deputy chief said that he embodied the highest aspirations of the United Nations and the human family.

Affectionately known as Madiba, she said that the 2021 celebration would have been Nelson Mandela’s 102nd birthday.

She pointed to an alarming trend that people with little or no knowledge of historical facts were infected by the virus of disinformation and distortion and embracing violent ideologies.

“COVID-19 has intensified this, rolling back years of progress in the global fight against poverty and injustice, leaving the marginalised and disenfranchised suffering the most, and often being blamed for problems they did not cause.

“It is our individual responsibility to follow Madiba’s example of humility, forgiveness and compassion,’’ Mohammed said.

People of African descent, indigenous, ethnic or religious minorities – and those who have fled their homes as refugees – bear the brunt of racism, xenophobia and related intolerance, according to the UN official.

“These are the ills that Nelson Mandela stood up against to create his lasting legacy,” the UN deputy chief said.

In September 2018, the Nelson Mandela Peace Summit at UN Headquarters gathered government and civil society representatives who committed to redoubling efforts for a prosperous, inclusive and fair world and declared 2019 to 2028 the Nelson Mandela Decade of Peace.

“It is our individual responsibility to follow Madiba’s example of humility, forgiveness and compassion while advocating for democracy and peace throughout the world.

“The COVID-19 pandemic has shown us the vital importance of human solidarity and unity, values championed and exemplified by Madiba in his lifelong fight for justice.

“And with a role for everyone, she urged the gathering to be inspired by Madiba’s message that ‘each of us can make a difference in promoting peace, human rights, harmony with nature and dignity for all,” she said.

The deputy secretary-general shared that ever since her youth, when she was trying to find her path, Mandela had been a personal inspiration.

“As we reflect on Madiba’s life and work, let us each stand up and be counted. Let us borrow a leaf from his stubborn optimism in the human endeavour.

“Let us all honour his call to action and be energised by his legacy,” she urged.

In his remarks, General Assembly President, Volkan Bozkir, said that in life and legacy, Nelson Mandela advocated for “the inherent dignity and equality of people”.

“Both within and between nations, regardless of race, nationality or belief – universal values, set out in the UN Charter and human rights treaties.’’

As the Assembly is tasked with upholding and protecting these values, he said it is only right to “convene here today, to celebrate, promote these ideals and to honour Nelson Mandela”.

Bozkir said the Mandela name was synonymous with the fight for justice and equality which must be remembered when considering the plight of 82.4 million forcibly displaced people worldwide.

“The plight of 82.4 million forcibly displaced people worldwide, women and girls subjected to sexual and gender-based violence, and the intolerance and racial discrimination that threaten to erode the progress he fought so hard to advance.

“As an international community, we must take collective action. For we will not achieve the targets of the 2030 Agenda whilst racism and discrimination persist,” said the Assembly President.

According to him, the COVID-19 pandemic has caused great suffering for individuals and nations, putting health systems under immense strain, creating an unparalleled socio-economic crisis and hijacking our development trajectory.

“In recovering, human rights must be upheld for everyone, everywhere and multilateral efforts galvanised for fair and equitable vaccine access for all.

“Put simply, we must act in the spirit of Madiba, if we are to build back better.’’

Naledi Pandor, Minister of International Relations and Cooperation of South Africa told the meeting that systemic racism has had a pernicious effect on communities everywhere.

Reminding the Assembly that Mandela used the Swahili world ubuntu to explain that “to be free is not merely to cast off one’s chains” but to live in a way that enhances the lives of others, she offered the additional phrase, Mimi ni kwa sababu wewe ni – which translates as “I am because you are”.

“We are all connected, and that one can only grow and progress through the growth and progression of others,” she said.