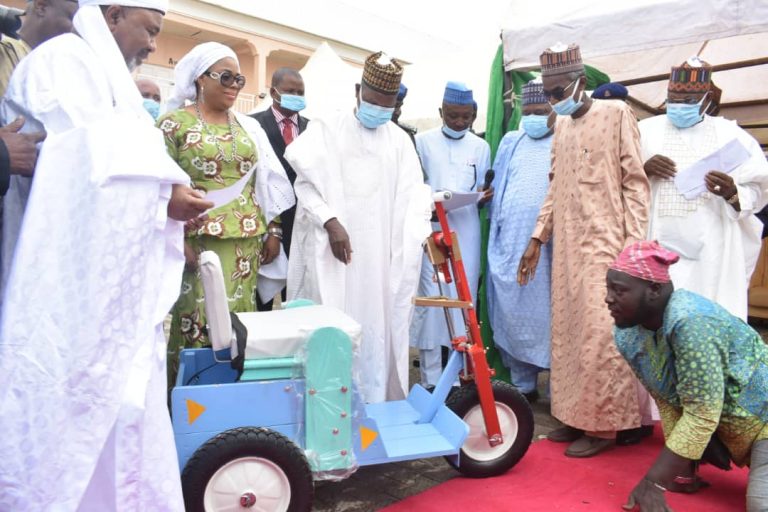 Gov. Aminu Bello-Masari of Katsina State has donated wheelchairs to 200 physically challenged persons across the 34 Local Government Areas of the state.

The governor made the donation on Thursday while inaugurating Aminu Masari Youth Foundation in Katsina.

According to Masari, the gesture was part of efforts to touch the lives of the physically challenged persons in the state.

He said that the foundation was expected to create positive opportunities for youths and provide humanitarian services to the less privileged.

The governor further explained that the foundation would embark on a mentorship programme for youths to realize their potentials as well as medical outreach to the needy.

Masari added that the inauguration marked a turning point towards the rollout of his dreams and plans for the future of the Nigerian youths in order to make them self-reliant.

“This is my vision for setting up this foundation as my humble contribution towards redirecting our youths from dependency to productive and formidable people with hope for a better future.

“This endowment will be used to provide the needed support to our youths in areas of education through scholarships and youth empowerment.

“And also medical outreach for the less privileged and positive mentorship opportunities for our youths to realize their full potentials,” Masari said.

He said that the future of youths in Nigeria was tied to the realities of the political economy of the nation.

“Thus, the kind of youths groomed in any society has a direct link with the opportunities provided to them.

“An economically powered youth is more likely to be patriotic, hard-working and reliable in the drive to achieve sustained development.

“While economically weak youths are prone to the vices of negative manipulation, opportunism, frustration and crime,” the governor said.

Masari urged the Foundation’s Board of Trustees (BoT) under the leadership of Kabir Mashi to remain steadfast and adhere strictly to the objectives of the foundation.

According to him, it was aimed to achieve its four cardinal programmes of education, empowerment, medical outreach and mentorship.

Also speaking, Mashi said that members of the Board would work in line with the objectives of the foundation to achieve the desired goal.

He assured the governor of their unalloyed commitment towards the achievement of the purpose of the foundation.

Responding on behalf of other beneficiaries, Malam Muhammad Abubakar, thanked the governor for the gesture.

He said the gift of the wheelchairs was a dream come true for so many of them as it would facilitate their mobility.

Abubakar urged other wealthy individuals and organizations to emulate the governor in reaching out to the physically challenged in the society.