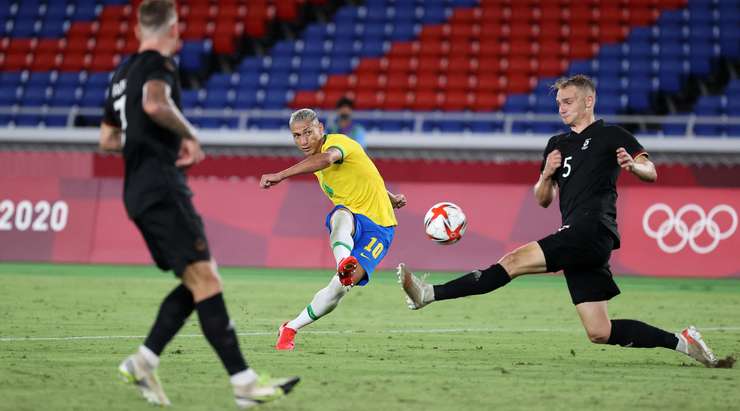 Richarlison scored one of his goals

Richarlison grabbed a hat-trick on Thursday as Brazil thrashed Germany 4-2 in their first football match at the 2020 Tokyo Olympics.

The match was dubbed final before final as these two sides met at the final of the 2016 Olympics in Rio, Brazil, with the Neymar-led side defeating Germany on penalty to grab the gold medal, the only medal that had eluded the Brazilian national team so far.

Brazil dominated play, with Richarlison scoring the opener on 11 minutes.

He was in the right place at the right time to get to the rebound inside the box and gleefully rifled the ball into the right side of the goal.

The Brazilian number 10 doubled his nation’s advantage on 22 minute to make it 2-0.

He jumped highest to connect with a perfect cross from Guilherme Arana and planted his close-range header into the left side of the goal. Florian Muller was helpless.

Richarlison got his hat-trick on 30 minutes with a superb goal.

He latched on to a superb pass and broke through the defence before firing a shot from mid-range that went past the goalkeeper inside the right post.

Germany pulled one back on 57 minutes through Nadiem Amiri.

He picked up the ball from a rebound and from the edge of the box he unleashed a shot inside the right post.

Germany were reduced to 10 men on 63 minutes as Maximilian Arnold was sent off after a second yellow card.

But it was the European side that scored to make it 3-2 on 84 minutes.

Ragnar Ache headed the ball into the bottom left corner of the goal after getting on the end of a brilliant delivery that was sent into the penalty box from out wide.

Brazil made it 4-2 on added time with a goal from Paulinho, who collected a pass and without hesitation fired an unstoppable shot into the top right corner.