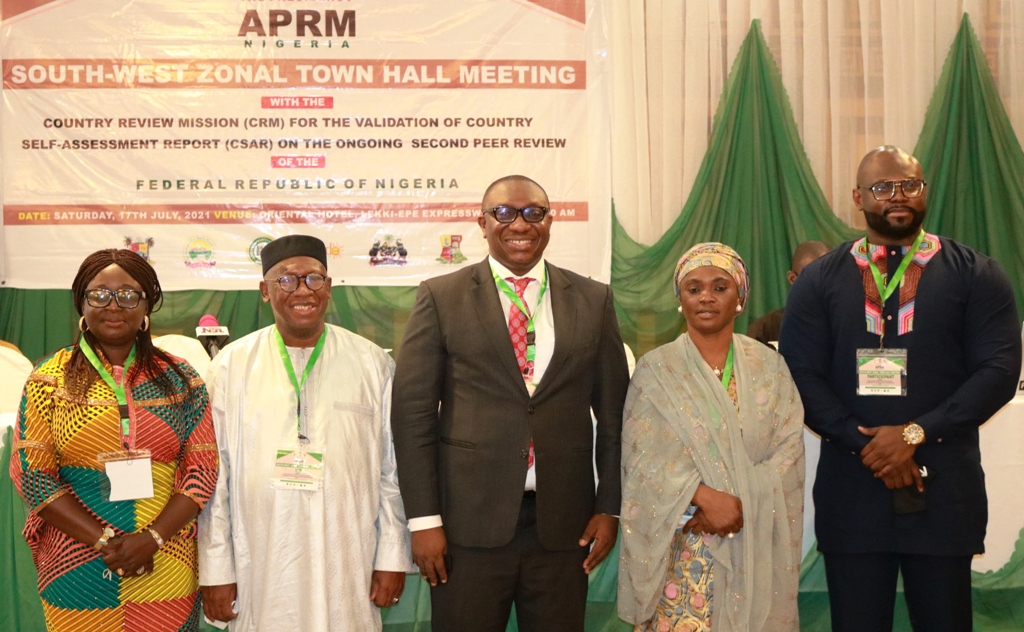 Lagos State Governor, Mr Babajide Sanwo-olu has called for better integration among the southwestern states and the nation in general to ensure good governance and economic development.

This call was made at the African Peer Review Mechanism (APRM) Nigeria South-West Zonal Town Hall meeting, hosted by the Lagos State government for the validation of the Country Self-Assessment Report (CSAR) on the ongoing Second Peer Review of the Federal Republic of Nigeria, held at the Oriental Hotel, Lekki-Epe Expressway.

Recalling the recent Southern Governors forum in Lagos, the Governor represented by the State Commissioner for Economic Planning and Budget, Mr Sam Egube said the Forum on its platform continued interactions to harmonise views for national development and continued support for local government.

“We just recently hosted the Southern Governors and in the platform, Governors around continued that interaction that takes to harmonise our views for national development. Of course, we are not against the local government, the idea is that Nigeria must get better and we need a framework that works perfectly for Nigeria and Nigerians.

“The issues around the conversation are the integration from the South West region; how are the learnings from Lagos being incorporated in the learnings in all other States, how is the exchange program going on between Lagos and other States and how is the InInter-Stateechanisms working in the Nigerian Governors Forum, as well as other platforms that are in place to ensure that we have performance standardization, things around transparency, accountability nationally and how the institutions ensure these works continue to function.”

He added that Lagos has always been at the forefront in judicial interpretation as well as forcing laws that will make a modern government and ensuring collaborations with other States for economic cohesion.

“Lagos is always at the forefront in looking for judicial interpretation as to the things that we do, forcing laws that will make us a modern State and ensuring that we collaborate with other States to ensure that there is oneness in this.

”We are making progress in different areas in terms of the framework, some States are stronger than others and if you see Lagos for instance, we are a leading light and you find that given the number of people coming into the State is an indication of that,” he said.

The National Coordinator/Chief Executive Officer, AUDA-NEPAD Nigeria represented by Mrs Jawaretu Olumoko said, there has been remarkable development in the southwest geo-political zone based on reports.

She added that the second review process would help identify the strengths and weaknesses of each state to make recommendations to the government for implementation of the National Programme of Action (NPOA), which is used as a blueprint to strengthen best practices in Nigeria’s democracy, political and economic governance.

“What I have observed so far is that the six states that form the southwest geo-political zone have been performing excellently based on the response from their representatives.

”What we are looking out for is that we want to know the strengths and weaknesses of each of the states because that is what will help us to put together our National Programme of Action and we will be able to make recommendations to the government so that there will be iman improvement, especially in their area of weaknesses.

“There are a lot of benefits from this (town hall meeting), most important one is an experience shared. We have six states in the southwest geo-political zone, now we are listening to each representative from each of the states and we are learning from each other; exchanging ideas,” she said.

In her remarks, Barr. Iyabo Fakunle-Okeinen, Ekiti State Commissioner for Environment and Natural Resources, who also is a member of the National Governing Council for the Second Peer Review thanked Governor Sanwo-Olu for his unwavering support since the inception of the exercise.