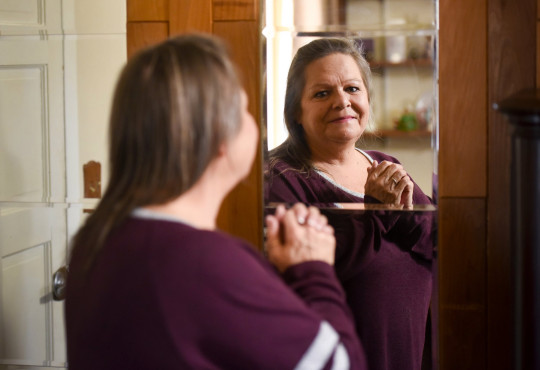 Connie Parke can now see herself in the mirror

A 59 year-old woman Connie Parke of Aurora, Colorado in the United States, has regained her sight after 15 years of blindness.

It was not by a church miracle, doctors were careless in misdiagnosing her eye problem as glaucoma.

It was cataracts, which could easily have been removed to restore her sight.

Connie last saw her family’s faces over a decade ago – but now she can watch as her grandchildren play and finally knows what her adult daughter looks like.

When she started losing her vision and eventually went blind, she was told it was detached retinas or glaucoma.

‘People need to get rechecked because I was blind for 15 years probably for no reason”, she said in a report by meto.co.uk.

‘They’ve been doing cataract surgeries for years.The day the retina specialist told me he saw no diseased retinas, my husband and I instantly got upset.

‘I had a little resentment towards the doctors that couldn’t find anything wrong or told me all these things were wrong.

“But the God’s honest truth is the day they took the patch off my eye, and I could see, it took all that anger away.’

The problem started back in 2003 when Connie began noticing halos and prisms on lights while driving, which her doctor said was due to glaucoma.

‘Three weeks later, I had lost even more sight and peripheral vision,’ she said.

At that stage, she was told that as they couldn’t operate, she would eventually go blind.

Her vision loss accelerated and she could barely see anything after a few months.

‘I didn’t believe it until I started hurting myself,’ she said.

‘I was getting lost, falling down stairs, falling up stairs and setting myself and my house on fire.

In 2004, she relocated from Montana to Denver, Colorado in 2004 to attend a training centre for blind people.

But there were things that were harder for her to adjust to.

‘I wasn’t really sure to how to use a cane and I would keep walking into bushes,’ she said.

‘I had to have somebody with me when I cooked to make sure the food looked okay.

‘I couldn’t vacuum and had to sweep in a pattern.’