The FBI in the United States has declared six Nigerians most wanted for cyber crimes, involving a $6 million swindle of over 70 U.S. businesses.

The FBI accuses the six of executing a business email compromise scheme that defrauded over 70 different businesses in the U.S., resulting in combined losses of over $6 million.

Uzuh, who appears to be the leader of the gang, was indicted on 18 October 2016, in the US district court of Nebraska, Omaha, on charges of wire fraud, conspiracy to commit wire fraud.

On 19 October, a Federal warrant was issued for his arrest.

He has been in hiding ever since, somewhere in Nigeria. 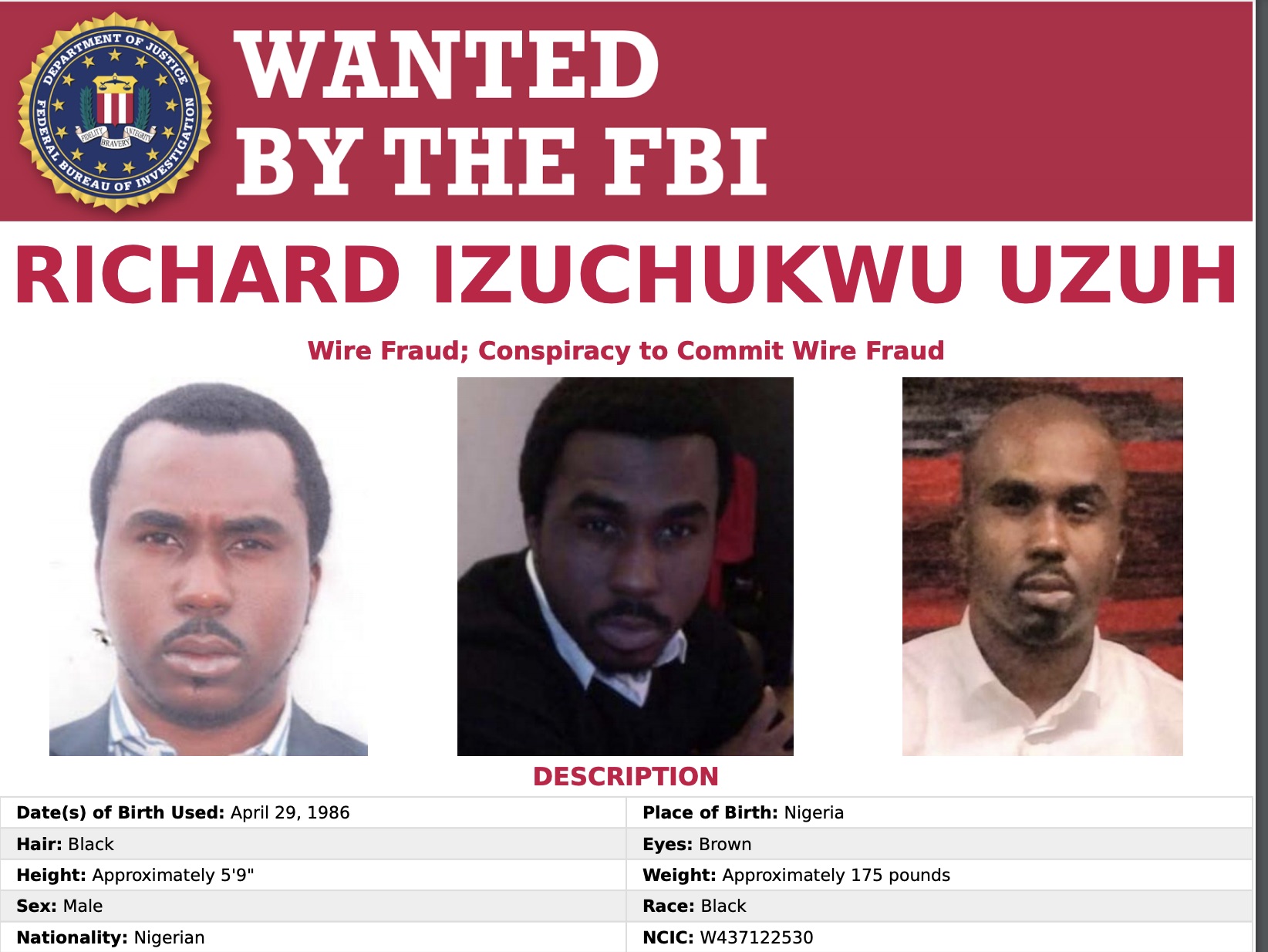 According to the FBI poster declaring Uzuh wanted, he and his co-conspirators sent spoofed emails to thousands of U.S. businesses, requesting fraudulent wire transfers.

Uzuh allegedly worked with money launderers, romance scammers and others involved in BEC schemes to launder the proceeds of other crimes through a complex network of witting and unwitting people in the U.S. and abroad. 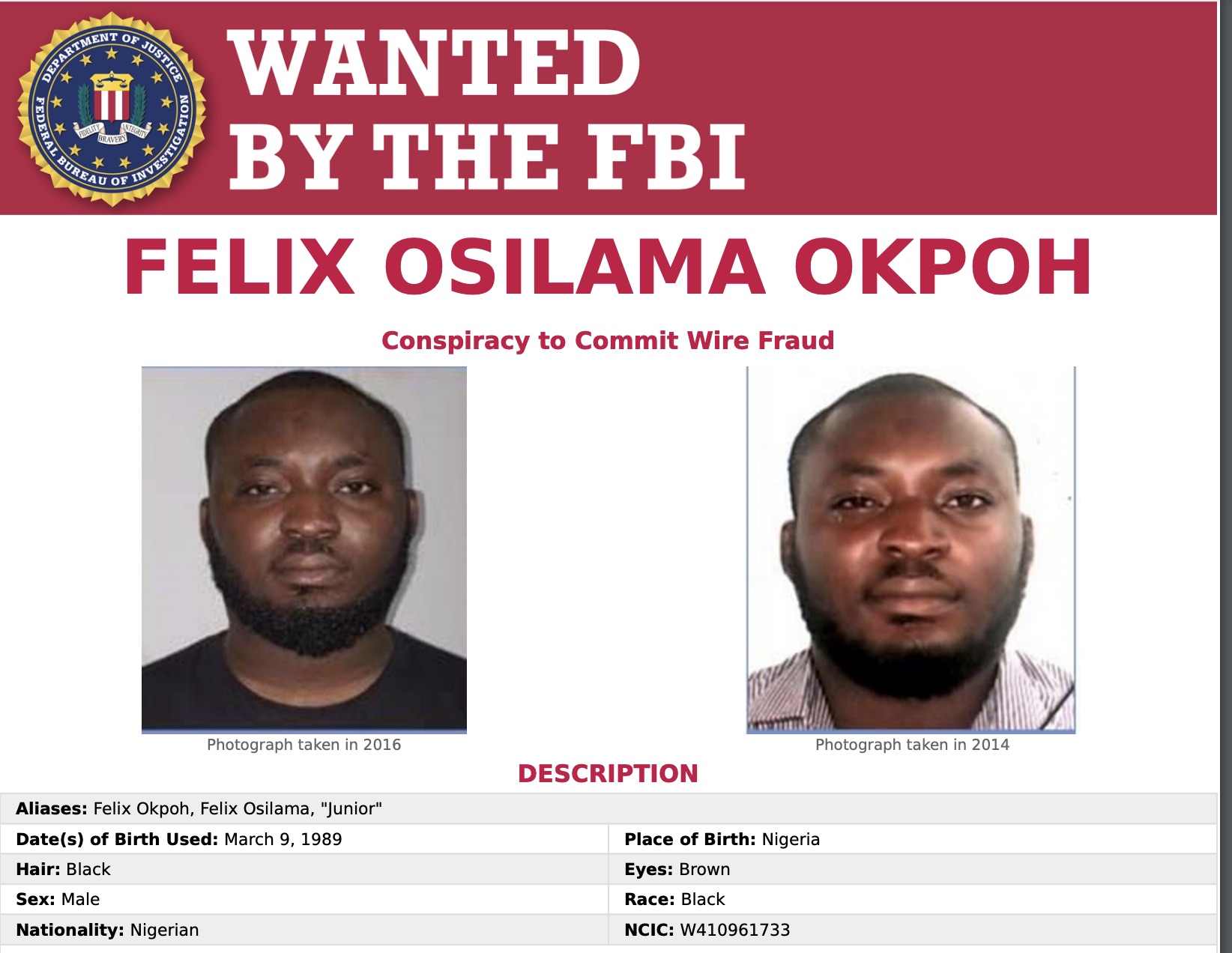 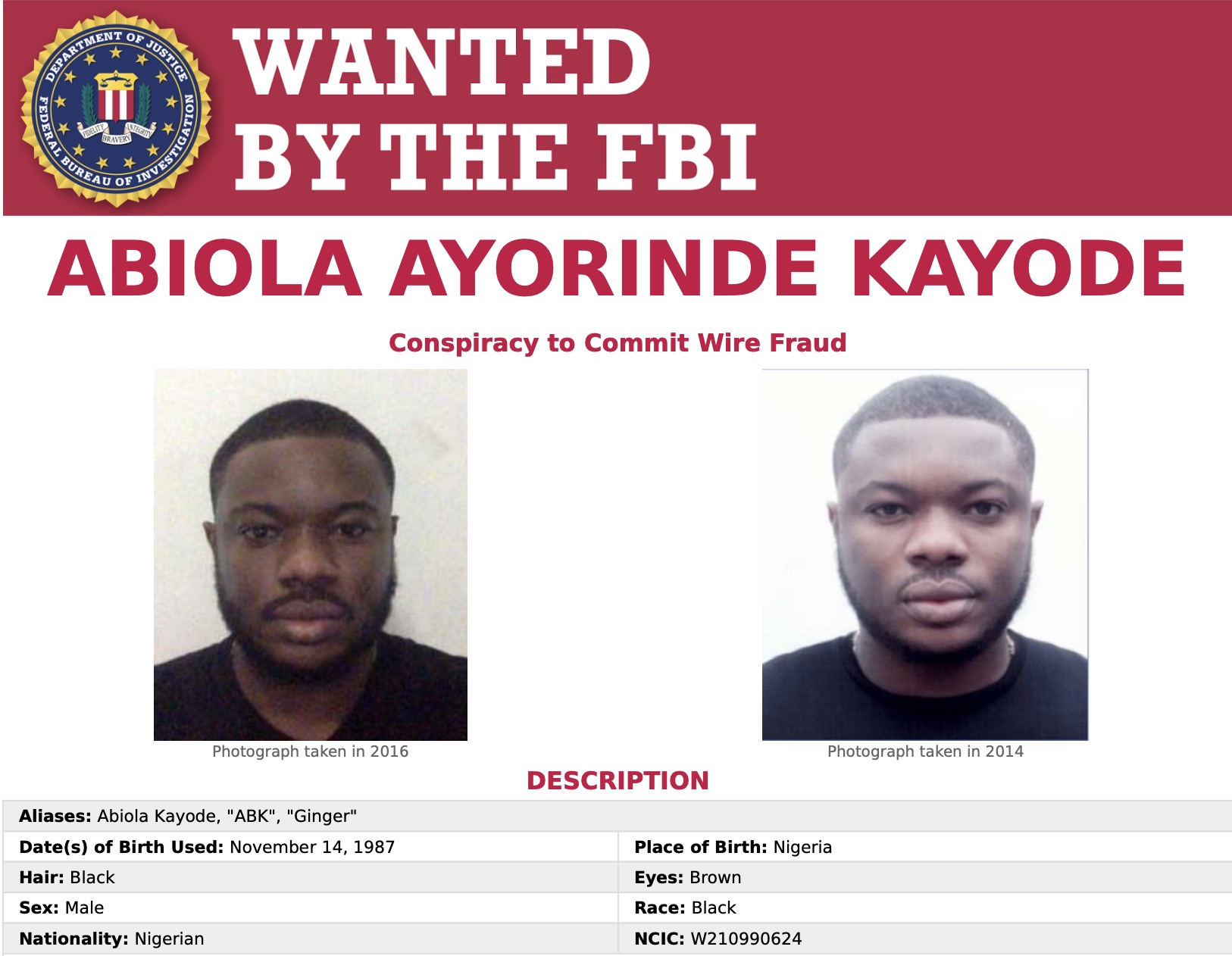 Okpoh who was indicted three years later was accused of providing hundreds of bank accounts to Uzuh and other co-conspirators.

The accounts were used to receive fraudulent wire transfers running into $1million.

Okpoh was indicted 21 August with a warrant of arrest issued on 22 August.

Afolabi Ogunshakin, who was also declared wanted was similarly accused of providing bank accounts to Uzuh and gang, to receive the fraudulent wire transfer. 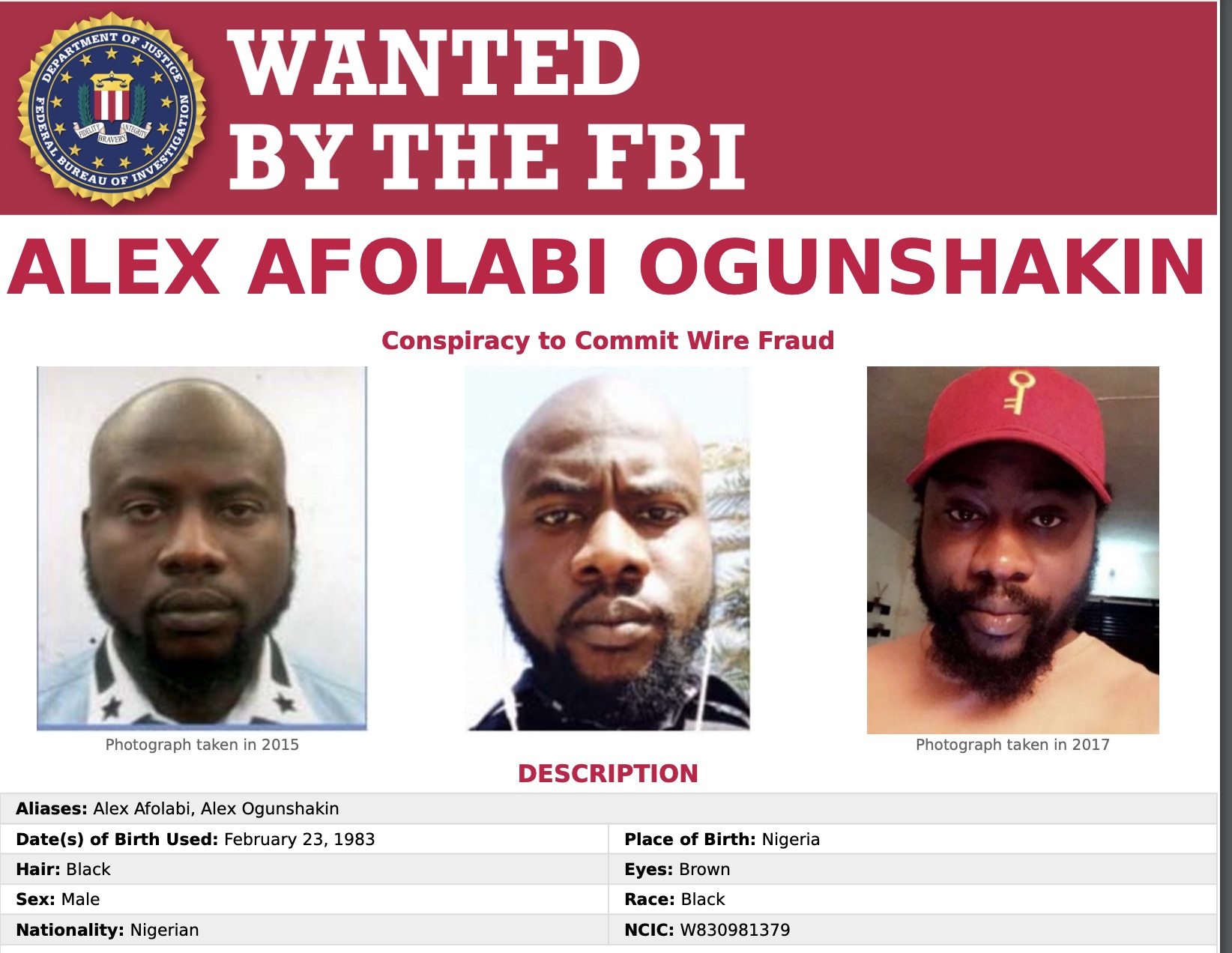 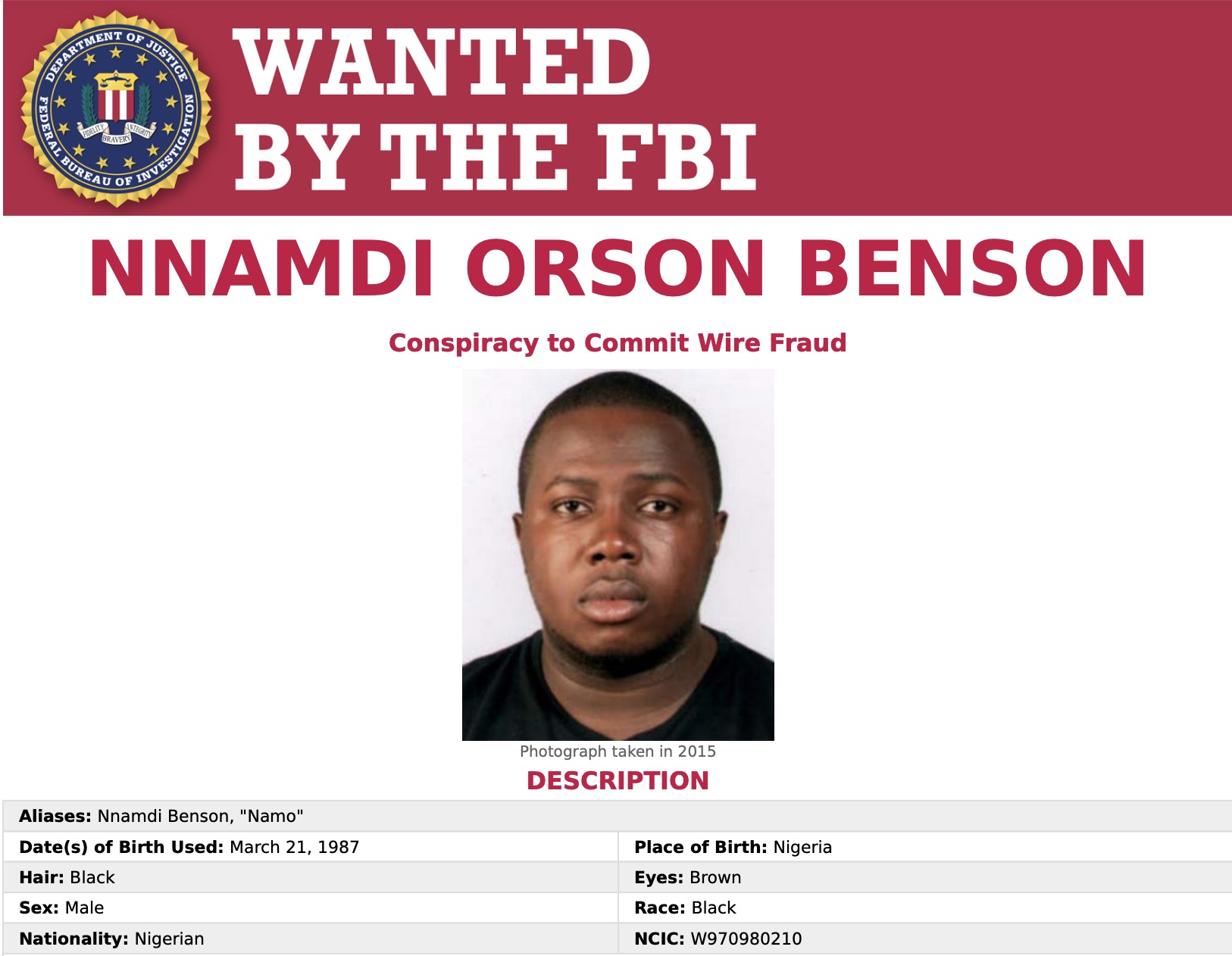 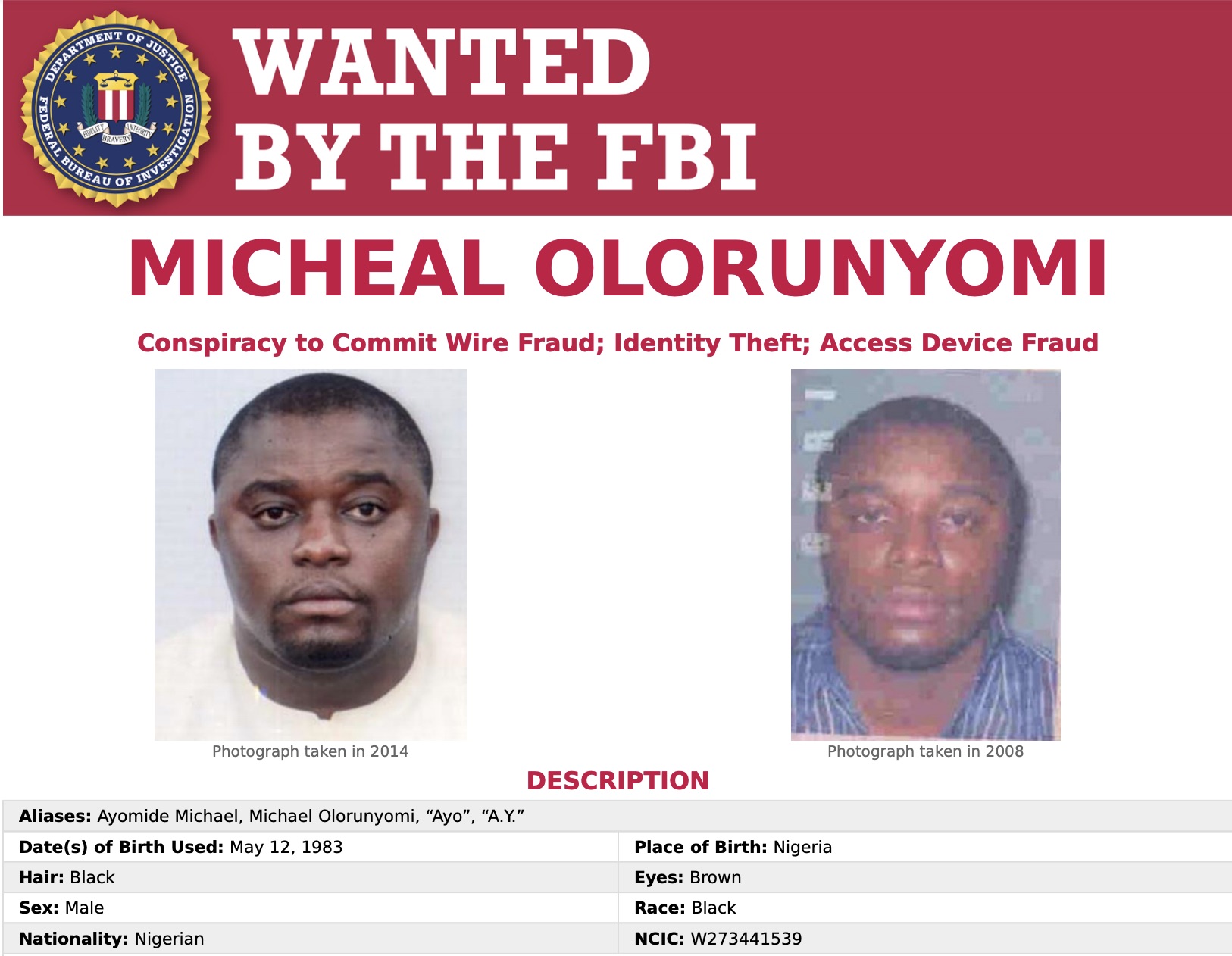 According to the FBI, Ogunshakin caught the bug of fraud, by staging his own BEC, after being an apprentice to Uzuh and other.

Like Okpoh, he was indicted on 21 August and a warrant issued for his arrest on 22 August.

Abiola Ayorinde Kayode, also on the FBI list was accused of providing bank accounts to Uzuh. He was also alleged to have conducted BEC and romance scams of his own.

He was indicted same day with Ogunshakin and Okpoh.

Nnamdi Orson Benson, the 5th member of the gang was also accused of making available bank accounts to the gang. He also staged his own scams too.

Michael Olorunyomi was not just a member of the six-man gang, he targeted vulnerable elders and widows in his scams.

He defrauded his victims of more than $1million.

He also aided the Uzuh group in providing bank accounts of his victims to be used for fraudulent wire transfers from other victims.

He was the last to be indicted on 13 November 2019 for conspiracy to commit wire fraud, identity theft and access device fraud.

His warrant of arrest was issued on 14 November.

All the wanted Nigerians are believed to be resident in Nigeria.

The FBI has urged whistleblowers to contact its Omaha, Nebraska field office, any local FBI office or the American embassy.