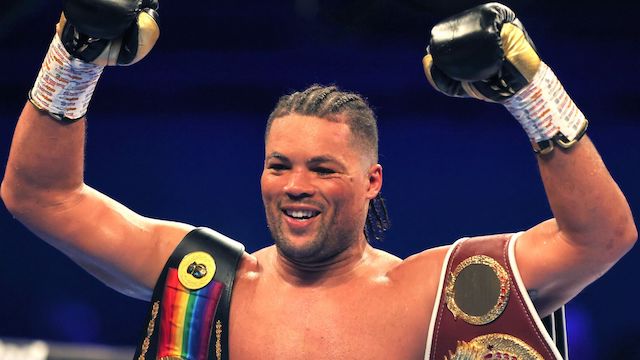 British heavyweight fighter Joe Joyce said he is set to fight the winner of Anthony Joshua vs Oleksandr Usyk blockbuster.

Joyce spoke Saturday night after defeating Cameroonian-French Carlos Takam in the sixth round.

This strengthened his status as mandatory challenger for the WBO title.

The British contender staggered Takam with a sudden assault in the sixth round at Wembley Arena.

Referee Steve Gray had to stop the fight.

Usyk has already been ordered by the WBO to challenge Joshua at Tottenham Hotspur Stadium on September 25.

Joyce has now voiced his desire to face the winner between Joshua and Usyk.

He told BT Sport: “What I want is AJ or Usyk!

“I don’t need any more tests.

“I’ve started at the deep end and I’ve carried on at a steady trajectory.”

The unbeaten 35-year-old stretched his unbeaten record to 13 victories, 12 by knockout.

However, he displayed a few alarming defence lapses as Takam landed his hook almost at will from the opening round, SkySports reported.