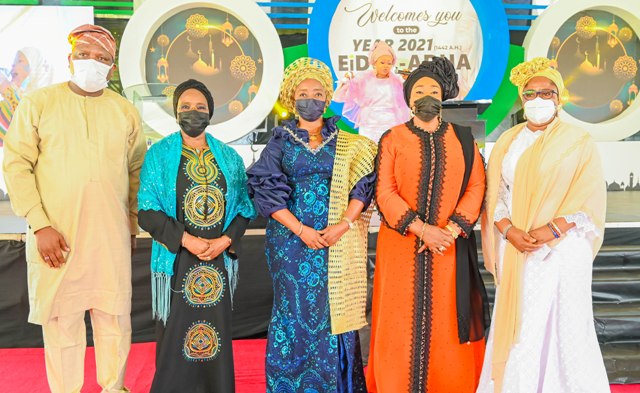 Wife of Lagos State Governor, Dr Ibijoke Sanwo-Olu on Sunday urged the Muslim community in the state to recommit to the ideals of the Eid-el-Kabir festival.

This, she said, was important for the people to uphold the virtues of sacrifice, love and peaceful co-existence.

Speaking at a special Eid-el-Kabir get-together get by the First Family held at Lagos House, Alausa, she explained that the celebration was geared towards appreciating Allah.

According to her, “The essence of this festival is such that lays emphasis on the virtues of sacrifice, love, peace, unity, helping the needy and most importantly, total submission to the will and commandment of God as aptly demonstrated by Prophet Ibrahim.

“Prophet Ibrahim, as a mark of clear sincerity to Allah’s will, was prepared to offer his son, Isma’il as a sacrifice despite the fact that it was a tough call for him. Both father and son proved their love and obedience to Allah.”

“More than before, this is the time for us to come together to make our respective communities, cities, states and country a better and safer place for everyone.

”This is the time for us to truly treasure brotherly love and harmonious co-existence, and also pray for the peace and tranquillity of Lagos State and Nigeria.

“Beyond the festivities, it is a time for us to renew our faith in our nation and implore Almighty Allah to restore to us those values that place a high premium on human life, love of neighbour and genuine commitment to the growth and development of our dear state and country.

The Governor’s wife said, just as she prayed for the continued peace, prosperity and boundless transformation of the state across all sectors and sections.

Besides, she commended Lagosians for coming out to vote at yesterday’s elections into the 57 local councils in the state, saying the peaceful conduct of the election proved that the hand of God was upon the state.

“Let me seize this opportunity to thank all the people that came out yesterday to cast their votes and to prove that God still exists.

”Some people were so afraid that immediately after the election there would be riot or fight but God proved himself again that peace can still reign in this country and in this state. All honour and adoration to God,” she said.

Also speaking, Governor Babajide Sanwo-Olu, who was represented by the Secretary to the State Governor, Mrs Folashde Jaji, thanked all the Islamic leaders and the people in the state for upholding peace and working with the government to move the state forward.

“If it was not for all of you, the peace and tranquillity that prevailed would not have happened and I want to appreciate the youth especially and also thank God for being in control of everything happening in Lagos State,” the Governor said.

He assured that with the continued support and collaboration of the people, his administration would achieve the dream of a greater Lagos.

Also speaking at the event, the Commissioner for Home Affairs, Prince Anofiu Elegushi, acknowledged
the unbiased disposition of the Governor Sanwo-Olu’s administration to the growth and development of
the two major religions in the State.

While saying that the approval of the Governor for the event which is the maiden edition, affirmed his
love for Muslim faithful in Lagos State, Elegushi also assured participants at the event that the
subsequent editions of the celebration will be better and more successful.

The celebration was attended by Islamic leaders led by the Chief Imam of Lagos, Sheikh Sulaimon Abou-Nola, various Muslim groups, as well as Quranic Rendition and musical entertainment by Sauti Arewa, Alaka Twins, Queen Kafilat Olohungbebe, among others.