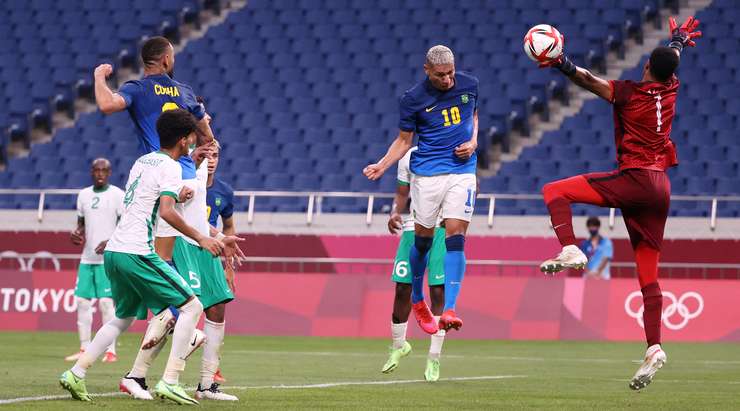 Richarlison got a brace for Brazil

The Brazilian Olympics football team have qualified for the quarter-finals of the ongoing Tokyo 2020 along with Ivory Coast.

Last Olympics finalist, Germany failed to qualify after playing 1-1 with Ivory Coast in their final match on Wednesday.

Brazil took the lead against Saudi Arabia on 14 minutes through Matheus Cunha.

He jumped highest inside the box to meet a perfectly executed corner kick by Claudinho.

His header was precise and ended up inside the left post, leaving the goalkeeper flapping in the wind.

Salman Al Faraj sent a free-kick in and Abdulelah Al Amri leapt high to connect with it on the edge of the 6-yard box. His close-range header went low inside the right post.

Brazil made it 2-1 on 76 minutes through Richarlison.

Bruno Guimaraes found Richarlison and he showed great determination to get to the ball and planted a header into the back of the net.

Richarlison got a lovely goal on 90 minutes but it was ruled out.

He later got his brace on three minutes of the added time.

Reinier passed the ball to the feet of Richarlison, who had an empty net in front of him and has no problems in tapping the ball in to make it 3-1.