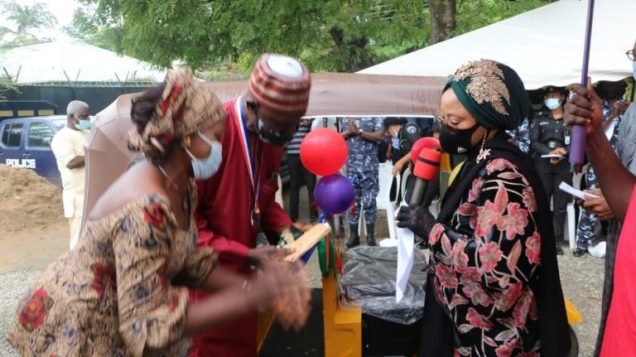 The FCT Minister of State, Dr Ramatu Aliyu, has donated a tricycle, offered employment and scholarship to the daughter and son of a retired Assistant Superintendent of Police, Mr Emakoji Jacob.

Aliyu announced the donation at a ceremony to honour the retired police officer for his dedication and commitment to duties, organised by the Ramatu Tijjani Aliyu (RTA) Foundation, on Wednesday in Abuja.

The minister, who is the founder of the foundation, described the retired officer as a man of indisputable honesty and integrity.

Aliyu explained that the objective of the ceremony was to highlight the positive and enduring legacies being engineered by the Nigerian Police Force.

“In appreciation of his selfless service to the nation, I am donating a tricycle (Keke) to him, offer employment opportunity to his first daughter with National Diploma and a scholarship to his son in Junior Secondary School three up to his graduation at the university of his choice.”

The minister stated that the retired officer had raised the banner for officers to be rest assured that commitment to service, nation and good character are virtues to embrace.

“In the discharge of his duties, Mr Emakoji Jacob exhibited a very rare and high degree of humility and compassion as a police officer. He is always calm, friendly and very respectful.

“He approaches everyone with the dignity you deserve as a human being and speaks to you in a calm voice with some stealth that exposes the discipline and training he had garnered over the years.

“He, on many occasions exhibited compassion and patience as he helped to inquire motorists while being cautious and mindful of his primary mission of safety of lives and property.

“He will never demand tips or any form of patronage,” the minister said.

She, therefore, called on officers who are still in service to emulate the exemplary conduct of Jacob, adding that good character pays.

Responding, Jacob said he was overwhelmed by the honour done to him by the minister through her foundation.

He prayed that God would continue to lift the foundation to greater heights.

“My sincere prayers to you today and always is that as you honour me, God will honour you and your children. God will lift you and the foundation to an enviable height,” he said.