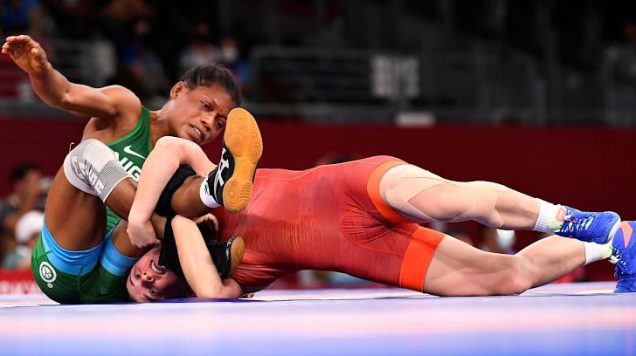 Adijat Idris lost 0-10 to Ukraine’s Oksana Livach on Friday in the women’s freestyle 50kg event of the wrestling competition to close Nigeria’s participation in the 2020 Olympic Games.

The 19-year-old Idris was completely overwhelmed in the round of 16 match at the Makuhari Messe Hall in Tokyo, losing due to technical superiority.

Livach recorded five technical points of two each in the fight which did not go beyond the first period.

Idris’s match was Team Nigeria’s last competitive involvement in the Tokyo Olympics which ends on Sunday.

It was an ending full of mixed feelings, after a performance that has been filled more with disappointments than joyful moments.

Even though Team Nigeria would be returning home with two medals —- one silver, one bronze —- the talking point of their performance would still be the series of misses.

The team of 25 male and 30 female athletes failed to return home with more medals as a result of several near-misses.

The misses were seen more as a result of administrative lapses than the athletes’ failure.

This no doubt will form the shape of the reception the team will receive on their return home.