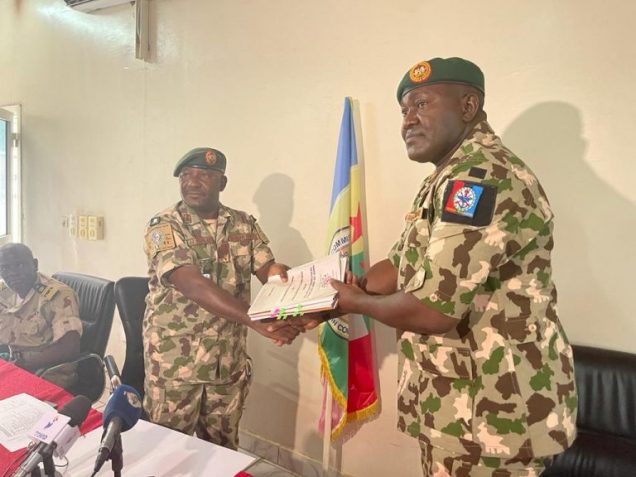 The Chief of Military Public Information for MNJTF, Col. Muhammad Dole, disclosed this in a statement issued in Ndjamena, Chad.

Ogunlade said that the successes and milestones achieved together were the result of the mutual respect, collaboration and cooperation of all the stakeholders.

He commended the contributions and outstanding performance of the officers and men of MNJTF for exhibiting professional skills in the course of their duties.

He urged the Military Staff Officers (MSOs) at the Headquarters to extend same support and cooperation to his successor and to always remember and support the gallant forces in the field.

He acknowledged the support from the strategic partners of MNJTF such as the European Union (EU) and Centre for Coordination and Liaison (CCL) towards attainment of operational objectives in the field.

Maj.-Gen. Ibrahim extolled the command and leadership qualities of Maj.- Gen. Ogunlade, whom he described as a distinguished teacher and an accomplished general, with tremendous track records of achievements.

Ibrahim said that he felt honoured to take over the command of MNJTF from an accomplished and seasoned infantry general like Gen. Ogunlade.

Ibrahim said that the time had come to redouble efforts and employ new strategies to end the menace of Boko Haram/ISWAP terrorists in Lake Chad region.

While decorating the outgoing Force Commander with the MNJTF Medal, the Head of Mission of MNJTF, Amb. Mamman Nuhu, commended Ogunlade for his outstanding contributions in restoring peace and security in the region.

Nuhu added that even though Ogunlade’s tenure was short, he significantly and diligently piloted the MNJTF towards attaining its mandate.

He commended his frequent operational field visits to troops’ location, which kept him abreast with the situations in the field.

Nuhu also welcomed the new commander and assured him of his total support and cooperation to discharge his duties.

According to him, General Ibrahim is coming with enormous operational knowledge and field experience being a previous General Officer Commanding 7 Division and Commander Sector 1 in the theatre of operations.

“This makes him familiar with the terrain and operational environment, “ he said.