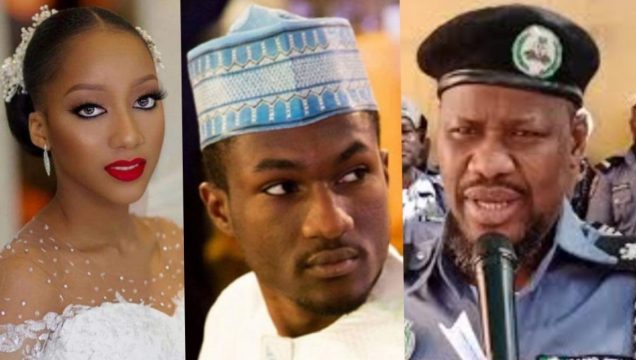 Nigerians have taken to social media to demand the arrest of Yusuf Buhari’s fiancee, Zahra Bayero.

Some Nigerians made the demand after the Hisbah Police in Kano criticized Bayero for the gown she wore to her bridal shower held in Abuja on Tuesday.

The gown had generated reactions on social media with many Nigerians accusing Hisbah of double standards over its perceived silence on the outfit which many claimed to be immoral for a Muslim lady.

However, the Hisbah later broke the silence.

In an interview with BBC Pidgin, Hisbah through Sheik Harun Ibn Sina said Zahra is not above the law.

He said the bride-to-be didn’t lead by example.

He, however, criticized those sharing photos from the bridal shower on social media, saying it is a sin to do such.

However, the comments from Hisbah generated another controversy with many asking if the agency now enforces Sharia precepts by merely criticizing or arresting and parading immoral suspects.

One Onyeabor Joseph Flexy on Facebook said, “So why didn’t you go and arrest her? But if it were to be a nobody that did that by now you would have paraded her, double standards everywhere. Oga if you know you can’t do anything, you better keep quiet or better still resign your appointment.”

Iveren Susan said, “I was reading through to see if they have arrested her for committing this great crime, but no they won’t. The law is always for the poor.”

Ande Isaiah MhenuTer said, “Is he supposed to criticize or to arrest her? You didn’t criticize others, you arrested them. Coming out to talk because of the backlash you received confirms your hypocrisy. If they born you well, go and arrest her. This Sharia law is truly meant for the poor!”