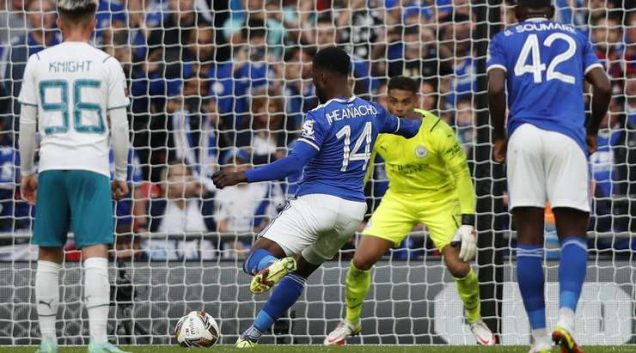 Iheanacho‘s penalty produced the only goal of the encounter, as Leicester won their first trophy of the new season.

Nathan Ake had committed a foul after making a slide tackle on his opponent, with the referee pointing to the penalty spot.

The Nigerian striker, who came in on 79th minute for Barnes, won the battle of wills and sent an unstoppable penalty past Zackary Steffen into right side of the goal.

On 18 minutes, Jamie Vardy fashioned a shot from the edge of the box after receiving an accurate pass.

Zackary Steffen made a stunning save to stop the effort from flying into the bottom left corner.

Ayoze Perez, on  23rd minute got on the end of a defence splitting pass inside the box and immediately directed a low shot towards the middle of the goal, but Steffen made a great save.

One minute later, Vardy Jamie reacted first to latch onto a rebound inside the penalty area. He sent a promising shot towards the middle of the goal, but it was denied by the goalkeeper who pulled off a superb save.

Vardy blew a huge opportunity on 45 minutes as he was totally unmarked and fired a first-time shot towards goal from a few yards out, but Steffen reacted superbly to keep the ball out.